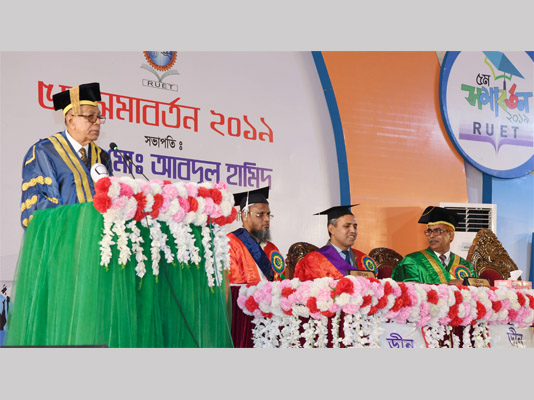 President M Abdul Hamid today came down heavily on those mixing formalin with fruits and urged politicians, teachers, students and all concerned to gear up campaign against the adulteration of foods and the unscrupulous traders.

“We have already become champion in food adulteration”, the President said with a note of sarcasm.

“I visited 80 to 85 countries till date. I haven’t seen this type of food adulteration and use of formalin in fruits in other countries, even in neighboring India and Nepal,” he said.

Addressing the fifth convocation of Rajshahi University of Engineering and Technology (RUET), Abdul Hamid, also Chancellor of the university, asked the graduates to play due roles against this food adulteration that causes fatal diseases like cancer.

The President asked the students to gear up vigorous campaign against it (bad effect of mixing formalin with fruits); otherwise as a nation “we will be crippled as well as destroyed.”

Expressing grave concern over the issue, Abdul Hamid said students will have to save themselves from the ill effects of formalin and awaken the people against such harmful practices and give a befitting lesson to the unscrupulous traders as well.

President Hamid was also critical of the misbehaviour with patients of some Bangladeshi physicians who virtually force them (patients) to go abroad for treatment especially in India.

“If the inhabitants of Rajshahi, Khulna, Jashore and some other areas become ill, they use to go to Kolkata hospitals. But why it is happening frequently? It’s only for the lack of friendly-behaviour and attitude of our doctors, their assistants, staffs and nurses,” he continued

“In Kolkata hospitals about 80 percent patients come from Bangladesh. It would seem that you are in Bangladesh there. We should get rid of this.”

The President urged country’s people, including politicians, teachers and students to forge unity to come out of this situation.

On the occasion, Abdul Hamid called upon the university teachers to take pragmatic steps so that that the education would be the means of the welfare of the country and mankind.

The President also stressed on concentrating to the invention of befitting and appropriate technologies through which the people can stand on their own feet.

“Recast the country’s higher education so that others can follow us,” he added.

The President also called upon the graduates and university family members to contribute to the celebration of the birth centenary of Father of the Nation Bangabandhu Sheikh Mujibur Rahman in 2020 and Golden Jubilee of country’s Liberation War in 2021.

Characterized by sharing of fond memories by the new graduates, the convocation ceremony conferred degrees on 2,586 engineering students.

Director of Virginia Tech Advanced Research Institute in the United States Saifur Rahman delivered his speech as the convocation speaker while RUET vice-chancellor Rafiqul Islam Sheikh gave his welcome speech on the occasion.