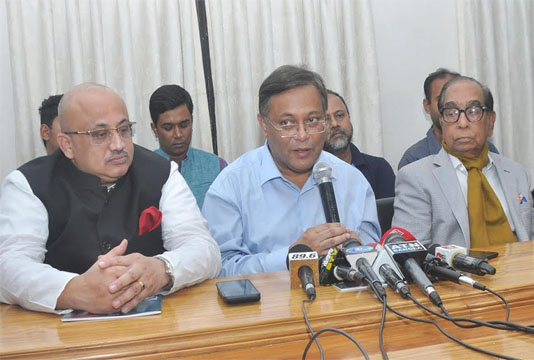 “Actually BNP is the role model of corruption, rape and terrorism. But they always tried to shift the responsibilities to others,” he told journalists at a press briefing after a meeting at Awami League president’s political office in city’s Dhanmondi.

Earlier, the minister attended the meeting of AL Publicity and Publication Sub-Committee.

Brushing aside the allegation of BNP secretary general Mirza Fakhrul Islam Alamgir, Hasan said Bangladesh had become champions for five consecutive times in corruption. BNP chief Begum Khaleda Zia whitened the black money and now in jail after getting verdict in a corruption case, he added.

Terming the terrorist activities of BNP as unprecedented in the world, Hasan said BNP had tried to kill the then opposition leader, AL President and incumbent Prime Minister Sheikh Hasina by grenade attack in the broad day light.

Twenty-four leaders of AL, including Ivy Rahman were killed in the attack, he added.

The attitude of the Khaleda Zia’s government following the grenade attack was a clear manifestation of her government’s role in the attack, the minister said.

Condemning the attack on a rally of Communist Party of Bangladesh (CPB) in Jamalpur recently, Hasan said’ “Awami League does not accept such heinous attack. We strongly protest such activities which are not acceptable at all.”

He said it reflected the party’s attempt to mislead the people or deliberate lapses on their part in comprehending issues.

The minister said BNP claimed the deals inked during the Prime Minister’s New Delhi tour were not disclosed to the people and President M Abdul Hamid, dubbing such claim a mischievous mix-up to confuse the people.

“Honourable Prime Minister called on the President and informed him about the tour . . . also spoke elaborately to the media about the deals and also conveyed everything to the parliament,” Hasan said.

Blaming BNP for failing to understand that no new agreement was signed with India other than a deal on opening the branch of an Indian bank in Dhaka, he said, “I became astonished that the BNP leaders misconstrued differences between Memorandum of Understanding (Mou) and agreement . . . the letter of BNP is totally gassy and it is nothing but their (BNP) political stunt.”

About the meeting, Hasan said the all works of the sub-committee centering the upcoming council of AL are progressing smoothly.

He said a jute-made bag will be given to every counselor and delegate. Besides, a website will be opened soon and an album along with the picture of Prime Minister Sheikh Hasina will be published centering the council, he added.