President asks army to give priority to public interest 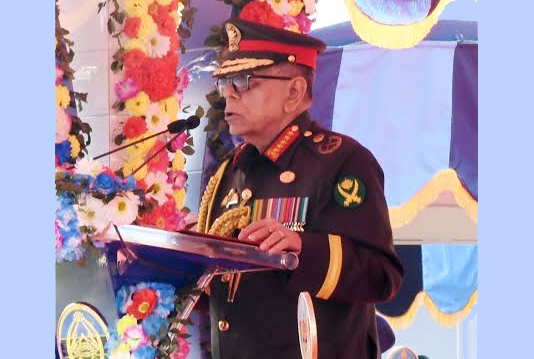 President M Abdul Hamid today asked the members of Bangladesh Army to stand by the people along with ensuring the national security.

“Stand by the people . . . Give topmost priority to the public interest and their welfare while discharging your duties,” he said, addressing the sixth reunion of the Signal Corps of Bangladesh Army at Jashore cantonment here this noon.

Noting that the state and the government go by for the welfare of people, the President asked to the army to stand by the people during their happiness and grief simultaneously overseeing the national security aspect.

Abdul Hamid, also the supreme commander of the armed forces, advised the army personnel to properly abide by the ‘Integrity Strategy’ and wait upon their respective duties with honesty, loyalty and sincerity.

“You must remember that people’s hard-earned money is used to bear all expenses of the state and its different development works,” he mentioned.

The President said the Corps of Signals of Bangladesh Army is playing a very significant and indispensible role being engaged in various communication duties in war time.

The army members, specially the signal corps, would be able to perform the duties, including national security and sovereignty, successfully by developing their professionalism and expertise, hoped the head of the state.

Referring to the revolutionary changes in modern war techniques, President Hamid said the application of safe and ceaseless communication system by using the modern technology and developed communication machineries is imperative to cope with the changed world.

The incumbent government has given priority to information technology and telecommunication sector to build a modern Bangladesh, based on modern technologies, he said.

Referring to the Bangabandhu Satellite-1 launching in the space, the President said the countrymen and Bangladesh army have already started enjoying its benefits effectively.

He said the plan for introduction of cyber welfare group, electric welfare unit, and strategic transmission unit, in line with the Forces Goal- 2030 will enhance the war capacity and communication system of the army in the days to come.

Pointing out different activities of the Signal Corps of the Bangladesh Army at home and abroad in various perspectives, he hoped, “The signal corps personnel would continue their activities upholding the image of the army and play a significant role in ensuring the overall development of the country.”

Terming the signal corps of the army a part of prideful heritages, the President said after the 1971 Liberation War the members of the corps are serving the country and the people sincerely.

Armed forces would continue to make contribution to the welfare-oriented activities as per need of the country and the nation in the days to come.