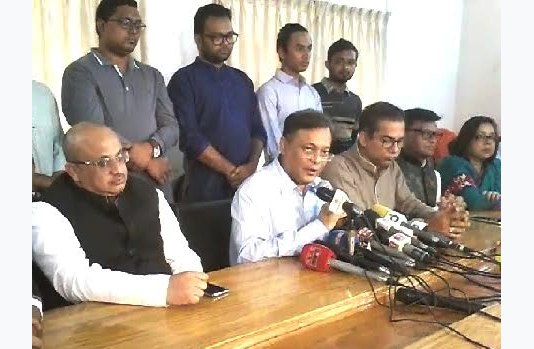 Information Minister Dr Hasan Mahmud today said the chaos created by BNP in the courtroom is a ‘serious’ contempt of the court.

“They (BNP) don’t abide by the law and they disregard the court. Creating chaos in the court is tantamount to contempt of the court which they (BNP) did in past too,” he told reporters after opening a webpage at Awami League president’s political office in city’s Dhanmondi.

The minister opened the webpage marking the 21st National Council of Awami League slated for December 20 and 21.

Hasan said the court gave time repeatedly in the case of BNP chief Begum Khaleda Zia. “The law runs as per its own course. The government has nothing to do in this regard. It will not be possible to release convicted Begum Khaleda Zia through movement . . . only the court can release her,” he added.

He said the countrymen will resist them (BNP), if they try to create anarchy and conduct assault on the masses in the name of movement and Awami League will also stand by the people.

Earlier in the function, the minister said Awami League is a modern digital political party and it shows the dream and the path to the people to move forward.

He said Prime Minister Sheikh Hasina had declared to make the country a digital one in 2008 as per the advice of her ICT Adviser Sajeeb Wazed joy.

“Bangladesh is now a digital country. About 15 crore SIM cards are being used across the country. A huge number of people are using internet and social media,” said Hasan, also the publicity and publication secretary of Awami League.

The minister said, “Now, the country is moving forward to fulfill Bangabandhu’s dream of ‘Sonar Bangla’ under the dynamic leadership of his worthy daughter Prime Minister Sheikh Hasina. The government of Sheikh Hasina has carried out huge development in every sector.”

About the website, the minister said people can know any information of the council from the site. Besides, they can find out all publications of the party in the page, Hasan added.