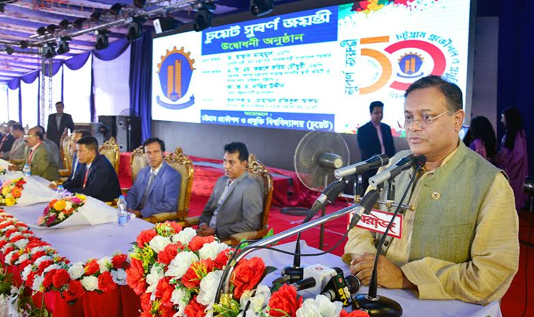 Information Minister Dr Hasan Mahmud today said Bangladeshi engineers are not only making their marks in the country rather contributing a lot in the global arena to the field of architecture and infrastructure development.

He said this as the chief guest while addressing the golden jubilee celebration ceremony of Chattogram University of Engineering and Technology (CUET).

The minister said graduates of CUET in the last 50 years have been playing an important role to the country’s economic uplift and progress side by side with contributing to the construction of imposing buildings and infrastructures in the Middle East and different Western countries.

“We the Bangalees may not financially rich globally but we are ahead of many other nations in terms of merit,” he said.

He said Rabindranath Tagore was the first non-European who won Nobel Prize in Literature in 1913, Bangalee scientist sir Jagadish Chandra Bose first proved plants have life and Bangalee architect Dr Fazlur Rahman Khan was the designer of the Sears Tower, the tallest building in the world between 1973 and 1998.

Hasan said many Bangladeshi engineers are still involved with construction of beautiful structures around the world.

Describing the economic development as a pre-requisite to building a developed country, the minister laid stress on imbuing with patriotism, humanity and values to reach this goal.

Hasan said about 90 percent people of the country use mobile phones, a good omen towards building a Digital Bangladesh.

He said Bangladesh is a densely populated country with the lowest per capita agricultural land. Even under such situation, Bangladesh has become a food surplus country to the utter surprise of the world community.

Nasir, in his brief speech, said Bangabandhu Sheikh Mujibur Rahman had created an independent country for the Bangalees. But the people of this land had to witness the most brutal assassination in the country’s history through gruesome killings of Bangabandhu and most of his family members in 1975.

He said Prime Minister is relentlessly working to build Sonar Bangla as dreamt by Bangabandhu.

Sheikh Hasina-led present government formulated a number of first track development projects on priority basis to attain a developed country within a short period of time, he added.

No change in post of AL president in next council: Quader