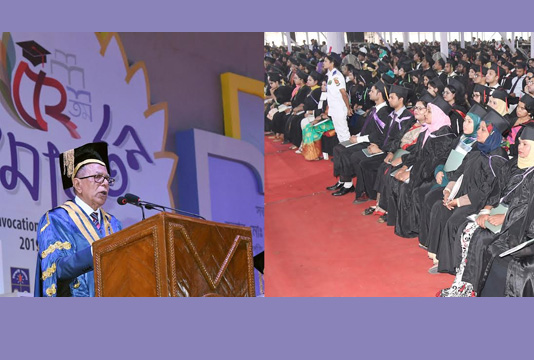 President M Abdul Hamid today came down heavily on the evening courses in public universities, saying that a section of teachers had turned university into a business institution disrupting its overall academic environment.

“Different public universities have opened many departments, evening courses, diploma courses and institutes. Apart from the regular courses, many students are coming out successfully from such ‘business course’ and a section of teachers are getting cash benefit turning the university into a business institution,” he told the 52th Convocation of Dhaka University (DU) this afternoon.

Expressing grave concern over the academic environment in public university, the President said “Many public universities changes its look into private ones at night . . . The campus also becomes a fair in the evening. But it cannot be accepted at all.”

The President observed the coldness of some teachers in taking regular courses while they (teachers) remain very serious to teach in the evening and diploma courses in private universities and it is due to getting handsome money from there. ”

Addressing the main convocation ceremony held at its central playground of DU, the highest seat of learning of the country, he issued a note of warning saying that the university is being run by the public money so all things should be accountable to people obviously.

Calling the vice-chancellor as the main guardian and academic leader of the university, the President said, “Sometime their activities indicate that they (VCs) have perhaps forgotten their actual tasks . . . Getting different administrative post-position, many teachers even forget their identity.”

Research is a very important and basic activity of a university, he said, but there arises controversy over the quality of research works and many departments have more professors than that of other posts.

The President directed the university authority to consider research activities depending on whether it is fundamental research or a research merely for getting the promotion.

Mentioning the recent untoward and unexpected incidents in different universities, President Hamid said it has tarnished the image of university and learners as well.

“Students get admitted into the university to acquire knowledge but not for facing any expulsion penalty or becoming dead,” he observed, adding, “If the authorities concerned would have taken pragmatic steps timely, the unexpected incidents might have not occurred.”

Congratulating the graduates for attaining the degree, he advised the students to become worthy citizens of the country and do something for their family members.

The President was very critical about the supply of fake medicine at remote villages and even in the city areas and asked the doctors and pharmacy students to do a vigorous campaign against the counterfeit drug which is pushing life towards vulnerable.

He thanked the DU authority for holding Dhaka University Central Students’ Union (DUCSU) election, hoping that the next polls would be held without any untoward incident.

Criticizing the role of DUCSU leaders, he expressed his grave concern and said the DUCSU leaders should work for the welfare of the students.

The President also expressed his gratitude to the DU authority specially the VC as it decided to confer Father of the Nation Bangabandhu Sheikh Mujibur Rahman with Honorary Doctor of Laws (Honoris Causa) posthumously in 2020, marking the Mujib Year.

Terming the Dhaka University as a centre of excellence and for building higher human resources, he said since its inception on July 1 in 1921, the university had close link with the 1952 Language Movement, 1962 Education Movement, 1969 Mass Upsurge and subsequently the 1971 Liberation War.

Nobel laureate in Physics Prof Takkaki Kajita, also director of the Institute for Cosmic Ray Research of Tokyo University in Japan, attended the programme as the convocation speaker.

The first convocation of DU was held on February 22, 1923. DUCSU leaders, diplomats and senior civil and military officials, among others, were present there.