No room for anti-liberation forces in AL: Quader 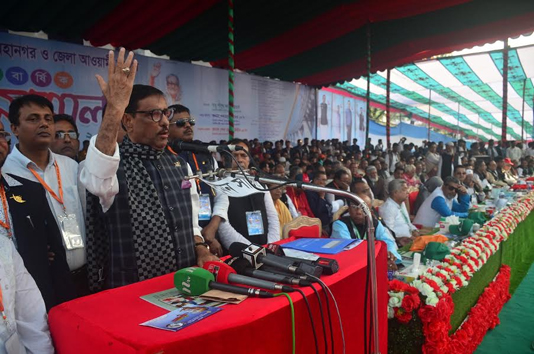 Awami League (AL) General Secretary Obaidul Quader today called upon the local leaders and workers not to give any room to anti-liberation forces and their successors in the party.

“There will be no room for anti-liberation forces, terrorists, extortionists and corrupt people in the Awami League committees,” he told the first session of the triennial council of Khulna district and city units Awami League (AL) at historic circuit house parade-ground here.

He said grassroots leaders and workers are the heart of the Awami League as they stayed with the party in its well and woes.

The AL general secretary said the court has given sentence to BNP Chairperson Begum Khaleda Zia so she must get release through the court.

The government will take stern actions if BNP carries out anarchy in the name of movement for Khaleda’a release, he added.

Quader said Bangladesh has become a role model of development under the dynamic leadership of Prime Minister Sheikh Hasina.

There is no alternative to Awami League to continue the current flow of development, he said.

He also announced a bundle development projects for greater Khulna which are waiting for getting approval of the ECNEC.

A 32 km Bagerhat-Mongla road construction project will be implemented involving at a cost of Tk 471 cr, he said, adding Tk 478 cr roads development projects of Road and Highways (R & H) department are being implemented in greater Khulna.