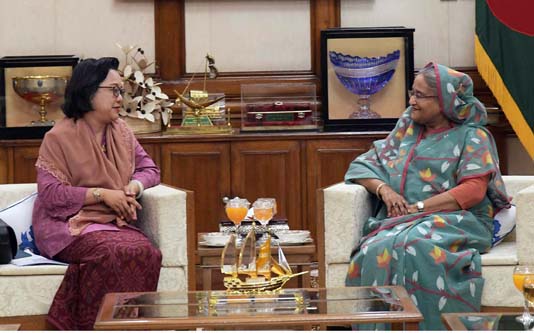 The United Nations Economic and Social Commission for Asia and the Pacific (ESCAP) has invited Prime Minister Sheikh Hasina to attend its 76th annual session to be held in Bangkok.

The annual session of the United Nations ESCAP is usually held in the month of May.

During the meeting, Salsiah highly praised the unprecedented development of Bangladesh coinciding with its higher economic growth under the dynamic leadership of Prime Minister Sheikh Hasina.

The premier sought assistance for further development of Bangladesh when the UN Under Secretary General wanted to know on which sector they could extend assistance to Bangladesh.

In this context, the premier said the GDP growth of Bangladesh is now stands at 8.15 percent. She also said her government has taken some programmes under the social safety network.

She expressed hope that it will strengthen connectivity optimize the use of existing infrastructure and increase the level of integration among different transport modes.

Referring to the Bangladesh, Bhutan, India, Nepal (BBIN) initiative and Bangladesh, China, India and Myanmar (BCIM) initiative, the premier said, “If connectivity is increased among the member countries of the organizations, trade and commerce will be increased in the region.”

Regarding giving shelter to over seven million displaced Rohingyas on humanitarian ground to Bangladesh, the premier extended her sincere thanks to the friendly countries and international organisations for supporting Bangladesh to this end.

Later, a seven-member delegation of Aviation Operators Association of Bangladesh (AOAB), led by its President Anjan Chowdhury, called on the prime minister at her official Ganabhaban residence.

They informed the prime minister about present state of the private sector airliners and helicopter operators of the country.

Apprising the problems the sector, now facing, they have sought cooperation from the prime minister for further development of the sector which they described a as potential sector.

The premier gave them a patient hearing and assured them of extending all necessary cooperation for further development of the sector.