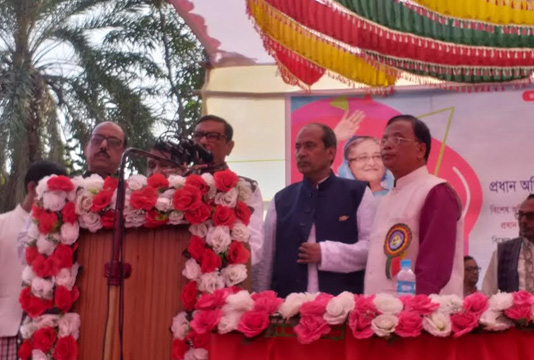 Awami League (AL) General Secretary Obaidul Quader today said the minority people are living in happiness and peace during the tenure of the present government as Prime Minister Sheikh Hasina is the nearest one of the minority people.

“After 1975, the government of Prime Minister Sheikh Hasina is the minority-friendly government. The minority people are living in happiness and peace during the tenure of this government,” he said.

Quader, also road transport and bridges minister, came up with the statement while addressing the triennial council of Habiganj district unit of AL at Nimtala in front of the deputy commissioner (DC) office here.

Referring to BNP Secretary General Mirza Fakhrul Islam Alamgir’s remark that the BNP government was minority-friendly, he said, “I cannot understand whether I would laugh or cry. Will anyone believe it? The oppression on minorities, rape and looting during the BNP regime in 2001 can be compared only with the ’71 brutality”.

The AL general secretary urged the party leaders to be activist-friendly, saying, “Home cannot be built inside the home. Pocket committee cannot be formed. AL has no need of bad people”.

The party has no need of tender manipulators, extortionists, land grabbers, torturers of minorities, corrupts, terrorists and drug traders, Quader said, adding: “You should remember that Sheikh Hasina made you leaders and lawmakers not to improve your pockets, but to improve the people’s fate.”