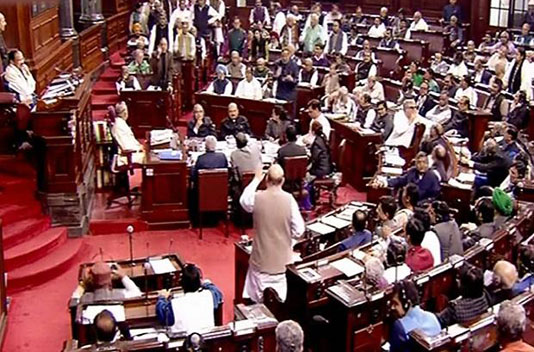 International Desk : Following a fierce day-long debate, the controversial “Citizenship (Amendment) Bill, 2019” was passed in Rajya Sabha tonight with a majority of 117-92 votes. Earlier, the Lok Sabha had cleared the bill on Monday with MPs supporting the bill outnumbering those against it 334 to 106.

The bill legislation seeks to amend the 1955 Citizenship Act by granting citizenship to six non-Muslim minority communities-Hindus, Buddhists, Sikhs, Christians, Parsis and Jains- who migrated India from Pakistan, Bangladesh and Afghanistan on or before December 31, 2014.

Despite strong protests by the opposition political parties including Congress, the bill, which was moved by Union Home Minister Amit Shah in Rajya Sabha this afternoon, was passed at about 9.10 PM.

Tabling the bill, Amit Shah rejected the charge of vote bank politics and said it (bill) will provide citizens to those vote minorities who were what he said persecuted in the three neighbouring states.

“The BJP had declared its intention to bring such legislation in its election manifesto for the 2019 general election and won the people’s approval,” he added.

He said Indian Muslims have nothing to worry about as they “were, are and will remain Indian citizens”.

A group of 900 scientists and scholars issued a joint statement against it saying use of religion as a legal criterion for determining Indian citizenship is disturbing, media report said.

However, the U.S. Commission on International Religious Freedom (USCIRF) in a statement yesterday, a day-after the bill was passed in Lok Sabha, termed the bill as a “dangerous turn in the wrong direction”.

The federal US commission said the bill “runs counter to India’s rich history of secular pluralism and the Indian Constitution, which guarantees equality before the law regardless of faith”.

According to media reports from the North-Eastern states of India, curfew was imposed in Guwahati today for an indefinite period while mobile internet services were suspended in 10 districts of Assam today as thousands of protesters opposing the bill took to the streets to protest the legislation.

Violent protests have broken out in Guwahati and parts of Assam and the North East over the controversial Citizenship (Amendment) Bill.

The Indian Army has sent two columns, each consisting of 70 soldiers and one or two officers, to Kanchanpur and Manu in Tripura and two others are on standby in Assam’s Dibrugarh and Bongaigaon, Indian NDTV reported.

A Police QRT (Quick Response Team) has been dispatched to Assam’s Dibrugarh district and a total of 5,000 paramilitary personnel have been deployed across the North East, the report says.

Protesters, who include students, civil society members and political leaders allied with the ruling BJP, have expressed concerns that refugees allowed by the bill could endanger identity and livelihood of indigenous people, the report said.