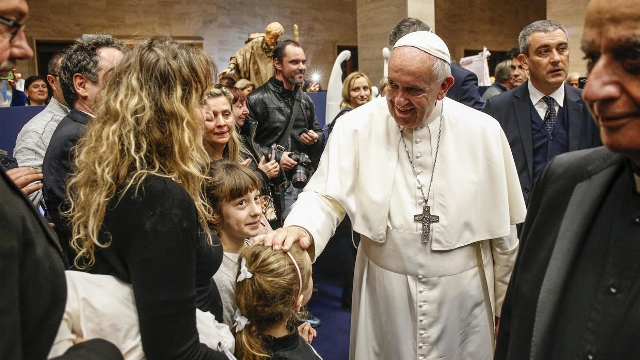 Mankind needs an “ecological conversion,” Pope Francis will say in his annual message of peace, arguing that greater respect for the earth will enable better relations between people.

The message, to be read in all Catholic churches on January 1, calls for “listening and contemplation of the world that God has given us as a gift to make our common home”.

“Faced with the consequences of our hostility towards others, our lack of respect for our common home or our abusive exploitation of natural resources — seen only as a source of immediate profit, regardless of local communities, the common good and nature itself — we are in need of an ecological conversion,” the pontiff will say.

Francis has repeatedly urged better protection of the environment, denouncing the exploitation of natural resources and warning of the risks of global warming.

During his visit to Japan last month, Francis also condemned nuclear weapons, and again referenced them in his New Year’s speech, saying that nuclear deterrence only achieves “the illusion of security” as mistrust and fear increase the risk of violence around the world”.

“War, as we know, often begins with the inability to accept the diversity of others, which then fosters attitudes of aggrandisement and domination born of selfishness and pride, hatred and the desire to caricature, exclude and even destroy the other.”

He also refers to the survivors of Hiroshima and Nagasaki, a living reminder of the devastation of the 1945 US atomic bombings.

Memory, he will say, helps serve as a conduit to peace, capable of keeping hope alive even amid conflict and war.

“The remembrance of even a small gesture of solidarity received can lead to courageous and even heroic decisions.

“It can unleash new energies and kindle new hope in individuals and communities.”