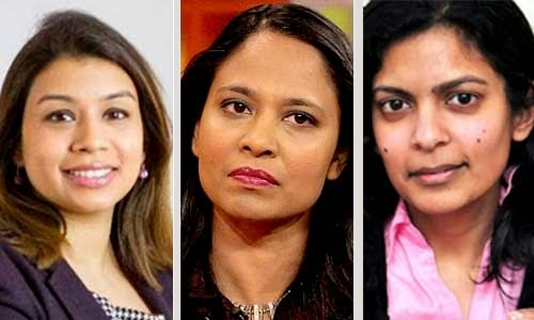 Rushanara Ali was elected for the four consecutive terms while Tulip and Rupa were elected for three times in a row. Tulip, Sheikh Rehana’s daughter and Prime Minister Sheikh Hasina’s niece, retained her Hampstead and Kilburn seat with a margin of 14,188 votes. She bagged 28,080 votes against her Conservative rival Johnny Luk’s 13,892 votes.

Rushanara was also reelected from Bethnal Green and Bow constituency bagging a majority of 44,052 votes against her Conservative rival Nicholas Stovold’s 6,528 votes. “Representing the place I grew up in is the proudest achievement of my life. I’m humbled by the support of all those who voted for me,” Rushanara said in her victory speech.

Rupa retained the Ealing Central and Acton seat for Labour. She bagged 28,132 votes against her Conservative rival Julian Gallant’s 14,832 votes.

“I thank the voters of Ealing, Acton and Chiswick for placing their
trust in me for the third time in four years. Gutted for good colleagues who
will not be returning to Parliament and indeed for the nation which will be
poorer for five more years of rightwing Tory rule and Brexit,” she tweeted
after the win.

Another Bangladeshi-origin politician Apsana Begum, who contested for
the first time in the UK general election, won in Poplar and Limehouse as a
Labour Party candidate after securing 38,660 votes. The Conservatives’ Sheun
Oke got 9,756 votes in the seat.

“I would like to express my deepest gratitude to the constituents of
Poplar and Limehouse for the faith that they have placed in me and my party,”
Apsana said after her victory.

“I do not underestimate the privilege they have given me and attempt to
return their faith by working hard to serve all communities,” she added.

In the June, 2017 UK general election, Tulip was reelected from
Hampstead and Kilburn seat with a margin of 15,560 votes. She polled 34,464
against her Conservative rival’s Claire-Louise Leyland 18,904.

Tulip was first elected to represent the constituency in the UK general
election of May 2015.

She got 23,977 votes against her Conservative counterpart Simon Marcus’
22,839 votes.

She, however, resigned as the shadow minister following Jeremy Corbyn’s
decision to impose a three-line whip on Labour MPs to vote in favour of
triggering Article 50.

Tulip’s maiden speech in the House of Commons was rated among top seven
memorable speeches, according to a ranking by BBC.

Born in Mitcham, London in 1982, Tulip completed two Master’s degrees –
one in English literature and another in Politics, Policy and Government –
from King’s College London.

She was a former and first Bengali woman councillor in Regent’s Park and
Cabinet Member for Culture and Communities in Camden Council, according to
Wikipedia.

Rushanara, the first British lawmaker with roots in Bangladesh, retained
her seat in 2015 from East London’s Bethnal Green and Bow constituency.

Hailing from Biswanath in Sylhet, Rushanara, was appointed UK Prime
Minister’s Trade Envoy for Bangladesh after the 2015 elections while she made
her debut in the House of Commons in 2010 polls.

Earlier, the Oxford-educated Rushanara, performed the responsibility as
the “shadow minister” of International Development and Education after being
elected as an MP for the first time in 2010.

Rupa was first elected in the 2015 UK general elections from Ealing Central and Acton constituency and after the victory she was inducted into the Labour Party shadow cabinet as the home affairs minister. Rupa is a senior lecturer at the sociology department of the Kingston University. Her ancestral home is in northern Pabna district in Bangladesh.