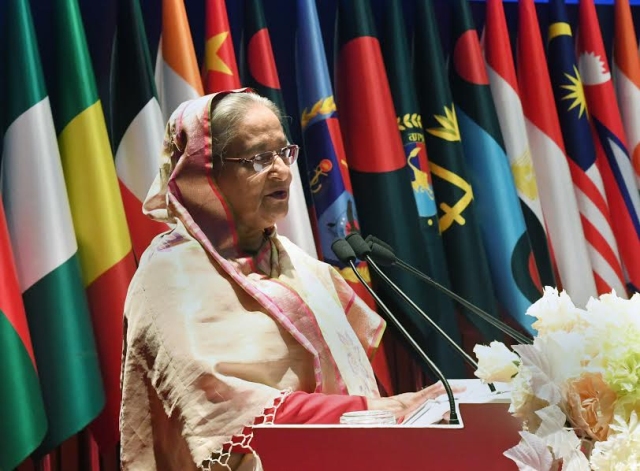 “We have been working to make armed forces more modern, professionally skilled and well-trained in line with the Forces Goal-2030 by taking various measures such as collecting latest military hardware and arranging training courses as well,” she said.

The prime minister was addressing the graduation ceremony of the National Defence Course-2019 and Armed Forces War Course-2019 at Sheikh Hasina Complex in Mirpur cantonment here.

Sheikh Hasina said “We are well aware of things what is necessary for
developing the armed forces as strong and time-befitting one and taking
crucial measures accordingly”.

“We’re progressing ahead to turn our armed forces into a more stronger and time-befitting one by formulating the Forces Goal-2030 in accordance with the Defence Policy of 1974 adopted by Father of the Nation Bangabandhu Sheikh Mujibur Rahman,” she said.

Describing the world as ever-changing, the premier said that they (armed forces personnel) would have to move with the pace of the changes.

So, the government has also been working on collecting modern military
hardware as well as more arrangement of trainings for armed forces personnel to make them efficient enough to cope with the changes of the world, she added.

Applauding the role of members of the Armed Forces in the United Nations peacekeeping mission, she said, “The latest military hardware and training will make the armed forces personnel familiar with the war weapons used in the UN missions which will help them play role without any hesitation in any circumstance alongside gathering experiences there.”

The premier urged the NDC and AFWC graduates to work for ushering the nation toward stability, self-reliance and sustainable development,
expressing her hope that being inspired by the motto ‘Security through
Knowledge’, the graduates will take the nation forward.

The prime minister also handed over certificates among the NDC and AFWC graduates.

Noting that her government established the National Defence College in 1998, Sheikh Hasina said, “We had established the college in a very small scale involving Taka 2 crore only and 15 manpower. Now, it has become a globally reputed defence college.”

The premier said that they will extend all possible supports for further development of the National Defence College as she has sympathy for it as she herself founded it.

Military personnel from 24 countries have so far been graduated from the college alongside the officials of civil administration, lawmakers, journalists and others, she added.

The premier urged the Armed Forces personnel to join hands with others, including officials of civil administration in the country’s development as all of the people have responsibility in doing so, being imbued with patriotism.

She thanked the members of the Armed Forces as they stand beside the people of the country during any natural disaster and accident.

The premier congratulated the freshers for their extra ordinary achievement successful completion of the courses.

She said her government has been working to turn Bangladesh into a developed and prosperous country in South Asia by 2041 after maintaining the status of a developing country until 2024 aimed at marching forward so that the next generation can celebrate the centenary of the country’s independence in 2071 as a developed nation.

To materialise the dream of the Father of the Nation to build a hunger- and poverty-free Sonar Bangla, the premier said her government has taken some specific and long-term programmes such as Delta Plan-2100 and the first perspective plan and second perspective plan.

The premier later joined the 17th joint board meeting of the NDC and Defence Services Command and Staff College at Sheikh Hasina Complex in Mirpur Cantonment here.