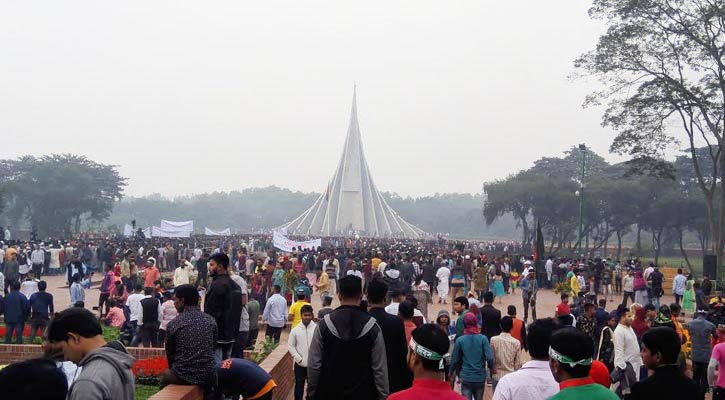 The 49th Victory Day was celebrated today across the country coinciding with the national level programmes as the people from all walks of life renewed their pledges to build a developed Bangladesh upholding spirit of the War of liberation. In Rajshahi, the Victory Day was celebrated in the divisional city as well as different parts of the district.

In the early morning, streams of people irrespective of age and sex thronged the city streets leading to the Shaheed Minars. The programmes also included hoisting of the national flag atop all public and private buildings, illumination and decoration of road islands, street sides, educational institutions and buildings with national flag and coloured miniature posters and banners.

In Khulna, the 49th Victory Day was celebrated by paying rich tributes to the martyrs along with persecuted women during the great Liberation War in 1971. To mark the day, different government, semi-government and autonomous bodies, educational institutions, political parties and professional organisations observed different programmes.

Khulna district administration celebrated the day by placing wreaths at the memorial erected for commemorating the martyrs killed in Gallyamari here in the morning. In Rangpur, the people from all walks of life celebrated the Victory Day with colourful programmes amid festivities paying rich tributes to the martyrs.

The day was celebrated with a renewed call to prepare complete list of Razakars and ensure their trial along with disseminating true national history. Thousands of cheerful people attired with red-green coloured dresses started rushing to the Central Shaheed Minar in the city since zero hours and continued placing wreaths there till this noon.

With the sunrise, 31-gun salutes were heralded at the Police Lines ground followed by hoisting of the national flag atop all government, semi-government and private buildings, placing of wreaths at the Independence Memorial ‘Arjan’, Central Shaheed Minar and Mural of Bangabandhu at Bangabandhu Square in the city.

In observance of the day, a colourful march past, discussion, cultural function, photo exhibition, sports competition and reception to the freedom fighters were held.

The Victory Day also was celebrated in other divisions, districts as well as upazilas amid festivity and fanfare remembering with gratitude millions of martyrs who made supreme sacrifices to liberate the country from the clutches of the Pakistan occupation forces through a nine-month bloody war.