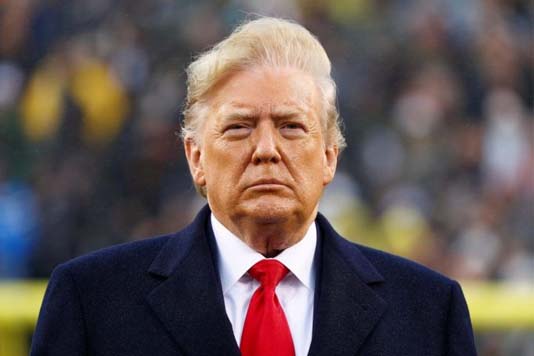 A key Democratic lawmaker said Sunday that President Donald Trump’s misconduct amounted to “a crime in progress” that threatens US democracy, as the full House prepares for a historic vote on impeachment. “Do we have a constitutional democracy, or do we have a monarchy, where the president is unaccountable?” Representative Jerry Nadler asked on ABC’s “This Week.”

He expressed anger with Senate Republicans who said they had already made up their mind to exonerate the president — even without hearing evidence or testimony — in the Senate trial expected next month.

When the Democratic-controlled House convenes Wednesday to weigh the two
charges approved by Nadler’s Judiciary Committee, Trump is expected to become
only the third US president to be impeached, after Andrew Johnson in 1868 and
Bill Clinton in 1998.

Richard Nixon resigned in 1974 just before a House impeachment vote.
Neither Johnson nor Clinton was convicted in the Senate.

Trump is counting on the Republican majority in the Senate to exonerate
him.

In repeated tweets Sunday he mocked a process that, to judge by his
frequent tweets, appears to consume him.

He retweeted one conservative commentator as saying: “The President did
nothing wrong here. There is no crime,” before adding: “Impeachment Hoax!”

Some influential Senate Republicans have suggested they have already made
up their minds and don’t need to hear the evidence compiled by House
Democrats in several weeks of hearings.

Senate majority leader Mitch McConnell has promised “total coordination”
with the White House and said there is no chance Trump will be convicted.

And Nadler said McConnell and Graham would be defying the oath required of
all senators in an impeachment trial: “to do impartial justice.”

But Senator Ted Cruz, a Republican, said Sunday that Democrats had come up
with “zero evidence” of the “high crimes and misdemeanors” the US
Constitution sets as the standard for impeachment.

“I think this is the beginning of the end for this show trial that we’ve
seen in the House,” he told ABC’s “This Week.”

Nadler, however, painted a dire picture of what is at stake.

“This president conspired — sought foreign interference in the 2016 election,” he said, referring to Russian meddling. “He is openly seeking foreign interference in the 2020 election” by asking Ukraine to investigate
Trump’s Democratic rivals. “We cannot permit that to continue,” he said, adding that to allow such behavior would be “a subversion of the constitutional order.”

“Conducting the trial according to this plan will… allow the public to have confidence in the process and will demonstrate that the Senate can put aside partisan concerns and fulfill its constitutional duty,” Schumer wrote.

One of the two impeachment articles to go before the House charges Trump with abuse of power for conditioning military aid and a White House meeting on Ukraine’s launching investigations into Democrats ahead of the 2020
presidential election.

The other charges him with obstructing Congress for refusing to cooperate with the inquiry and ordering other officials not to appear, a development Democrats say is unprecedented in American history.

The impeachment hearings have been a sometimes grim exercise for Democrats, who fear moderate members of the party from Trump-friendly districts could lose their seats next year if they vote to impeach.

One Democrat, Jeff Van Drew of New Jersey, who has been a vocal opponent of impeachment, is expected to switch allegiance to the Republican Party in coming days. He reportedly held a long meeting with Trump on Friday.