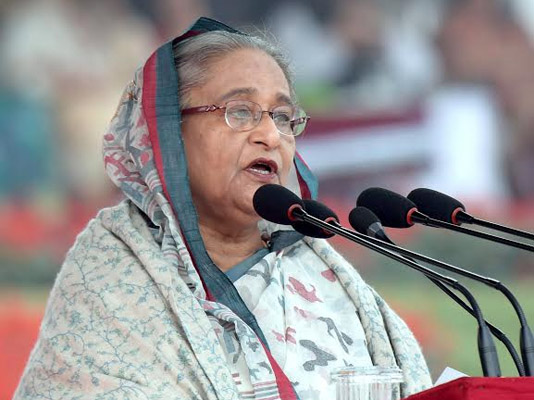 “Our government has been implementing massive development works under the BGB reformation programmes to raise the capability of the force, and under the programmes, the BGB Vision 2041 has been taken to build the BGB as a world-standard border force,” she said.

The prime minister asked the BGB members to discharge their responsibilities with patriotism and efficiency upholding good reputation and strictly maintaining chain of command of the force. “I hope that you’ll always uphold the good reputation and dignity of the force by performing your responsibilities with patriotism, honesty and efficiency,” she said.

The prime minister was addressing a parade of the Border Guard Bangladesh at its headquarters in the capital this morning marking the BGB Day 2019. Describing discipline and chain of command as the most important driving
force, she also directed the BGB members to maintain chain of command and accomplish their responsibilities with peace and discipline by obeying the instructions of the seniors.

“A disciplined force must abide by the orders of the authorities,” she said. Sheikh Hasina hoped that the BGB will move ahead by upholding its tradition and would get a dignity of the best border force of the world one day.

“I hope your united efforts, dutifulness, honesty and love for the people will further glorify and exalt the success of the force in future,” she said. In this connection, the premier assured of extending all sorts of support to continue the advancement of the force and its overall welfare.

Earlier, a smartly turned out contingent of BGB gave salute to the prime minister through a spectacular parade. Along with Director General of BGB Major General Md Shafeenul Islam and Parade Commander Colonel AMM Khairul Kabir, the prime minister reviewed the parade riding on a decorated open jeep.

Pointing out that the responsibility of safeguarding the borders of the country has been bestowed upon the BGB, the premier said a plan has been taken to set up smart digital surveillance and tactical response system on 328-km border on a priority basis.

Sheikh Hasina said two new modern and powerful helicopters will be added to the BGB next month as part of strengthening the force, while modern, time- befitting and effective tank destroying equipment are also being procured for it.

“Twelve armoured personnel carriers and 10 riot control vehicles are being procured and the BGB Dog Squad has been formed,” she said.

The prime minister instructed the BGB members to perform their duties properly to stop trespass, smuggling of drug and other goods, and human trafficking on the border.

“To stop any smuggling into the country, smuggling of drugs, child and
women trafficking and illegal intrusion are among the core duties of BGB. We
want you to perform the duties properly,” she said.

The premier said the construction of 317-kilometre road along the border
of Khagrachhari, Rangamati and Bandarban hill districts has begun for
strengthening the security of the borders of the hill areas and socioeconomic
development of the remote areas.

Alongside these, she said, 442-kilometre of the country’s 539-kilometre
border with India and Myanmar have been brought under surveillance of the BGB
by creating new battalions.

In this context, Sheikh Hasina mentioned that the remaining unprotected
border would be brought under surveillance of the BGB after completion of the
Chattogram Hill Tracts road along the border.

The premier put emphasis on imparting improved training of the BGB members
saying there is no alternative to training for any disciplined force.

She highlighted that construction work of another modern training centre
for the BGB members is progressing apart from the existing Satkania BGB
Training Centre and College.

Sheikh Hasina sought cooperation of all to establish the nation as self-
dignified one in the world materialising dreams of Father of the Nation
Bangabandhu Sheikh Mujibur Rahman.

She said the BGB has been working to provide assistance to the civil
administration to maintain law and order in the country.

Besides, the role and professionalism of the force in various activities
including assisting the civil administration to face natural disasters,
accidents and other emergency situations are being acclaimed by all, she
added.

The prime minister highly praised the BGB’s role in assisting the forcibly
displaced Rohingyas from Myanmar.

She said the BGB’s rehabilitation programmes and other humanitarian
assistance for the Rohingyas like providing security, medicare facilities and
registration were acclaimed by the international community.

Referring to the BDR mutiny on February 25-26 in 2009, she said the
incident was a black chapter in the history of the BGB.

She said BGB has been freed from stigma through holding trial of those
unruly and derailed BDR members involved in the BDR mutiny and killing of 74
people including 57 meritorious Army officers.

The premier prayed for eternal peace of the departed souls of the then BDR
director general, officers and other members as well as civilian people who
were martyred in the incident.

Earlier on her arrival at the parade ground, the prime minister was
received by Home Minister Asaduzzaman Khan Kamal, Senior Secretary of the
Public Security Division under the Home Ministry Mostafa Kamal and the BGB
director general.

She also witnessed a colourful cultural function performed by the BGB members. Later, the prime minister joined a “special darbar” of the BGB.