Power to be used for people’s welfare: President 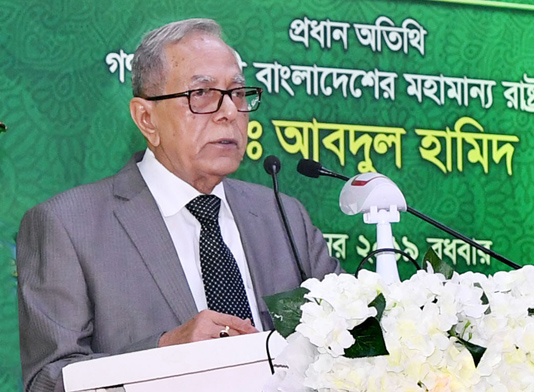 President M Abdul Hamid today pleaded for using power to deliver welfare to the citizens as holding power at any level is not a matter of show-off but to do good to the people.

“Power is not a matter to be shown off. . . It must be used for the welfare of the people only,” the President told a function at the Supreme Court Judges’ Complex here on the occasion of Bangladesh Supreme Court Day 2019.

The President added: “Every person in every sphere or department should understand that the power bestowed upon him or her is necessitated to serve the people . . . I believe if we can do it properly, the country will turn into a ‘Sonar Bangla’.”

He urged the judges to ensure rule of law and justice by utilizing their latent and thoughts, making them liable to the country, its people and the Constitution.

President Hamid asked the judges to work more to reduce the backlog of the cases, saying that presently the number of cases is on the rise.

“You have to take pragmatic steps for using the Alternative Dispute Resolution (ADR) to reduce the growing backlog of cases,” Hamid, also a senior lawyer, stated.

Recalling the contribution of lawyers to establishing the rule of law with respect, Abdul Hamid hoped that the lawyers would utilize their talent, prudence, honesty and integrity to help ensure justice for the litigants.

The President said, “The judges should be careful so that no justice-seeker gets harassed at the courts to get the copies of judgments soon after pronouncement.

Asking the Supreme Court administration to take steps for preserving all the activities– from filing cases to delivering verdicts– digitally, he said, “Steps can also be taken to produce the accused before court from jails and take depositions of witnesses through videoconferencing.”

Noting that the Information Technology (IT) in the meantime has made the daily activities easy and speedy, President Hamid stressed on properly utilizing IT to bring dynamism into court management.

The President suggested the judiciary to introduce “e-Judiciary System” which would help bring a revolutionary change in quick disposal of cases as the incumbent government is very sincere about it.

Mentioning that the Supreme Court has the judicial review power, the President urged the judges to perform their responsibilities with utmost caution.

The President asked the three state organs – judiciary, executive and legislature – to work in unison giving priority to the welfare of the country and its people.