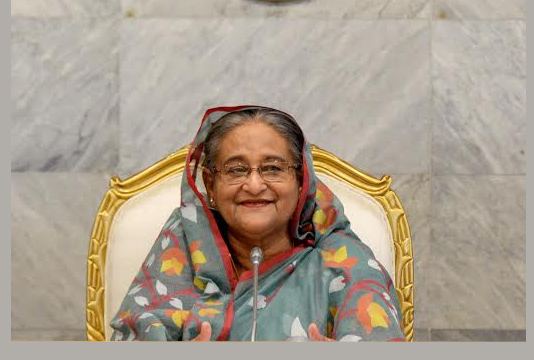 Prime Minister Sheikh Hasina today said the Awami League (AL) will always stay beside the people as it does politics for the welfare of the people.

In a message on the eve of the AL’s 21st National Council, she said the pledges of the council are to turn Bangladesh into a middle income country by 2021 and a developed and prosperous one by 2041.

“Under the leadership of Awami League, we will build a Sonar Bangla as dreamt by Father of the Nation Bangabandhu Sheikh Mujibur Rahman,” she added.

The prime minister also recalled with respect the 30 lakh martyrs, and the repressed mothers and sisters of the War of Liberation, martyrs of the August 15, 1975 carnage and grenade attacks of August 21, 2004.

Sheikh Hasina paid tributes to those who had contributions to strengthen the Awami League after facing different hurdles since the party’s inception.

She said Bangladesh Awami League is one of the oldest political parties in the sub-continent which has contributions to establish Bangladesh as a nation state, achieve global dignity as the Bangalee nation, attain self-identity, establish dignity of mother tongue Bangla and earn the recognition of a role model of development for the country.

The Awami League was founded in 1949 for achieving socioeconomic emancipation of the common people, she said.

She said Bangabandhu Sheikh Mujibur Rahman had encouraged the nation with the spirit of independence following the footsteps of the Language Movement of 1952, the Six-Point Movement of 1966 and the Mass-Upsurge of 1969.

Sheikh Hasina said Bangabandhu continued the struggle for independence and made the entire nation united defying imprisonment, repression and torture.

She said the Bangalee nation gave absolute mandate in favour of Awami League in the 1970 general election.

She said Bangabandhu had formally declared the independence of Bangladesh in the early hours of March 26 in 1971.

Under the leadership of Awami League government, the Bangalee nation had attained its final victory on December 16, 1971 through the Liberation War, the prime minister said.

She said independent and sovereign Bangladesh was the outcome of the dream cherished by the Bangalees for thousand years.

The premier said when Bangabandhu was working restlessly for turning the newly-independent and war-ravaged Bangladesh into a Sonar Bangla, the Father of Nation and most of his family members were assassinated on August 15 in 1975.

She said people of remote areas are also enjoying the outcomes of development.

The prime minister said the verdict of the trial of the Bangabandhu killing case has been executed, trial of national four leaders killing has been completed and verdicts of war criminals are also being executed.

She said because of the successful implementation of the AL government’s development initiatives in the last 11 years, the country has attained massive progress.

The premier said Bangladesh has become a lower middle income country and it is now among the five fastest growing economies in the world.

She said the country achieved 8.13 percent GDP growth in the 2018-19 fiscal year and the per capita income reached US$1,909 while the poverty rate came down to 21 percent.

The prime minister greeted the party leaders and workers and the countrymen on the occasion of the 21st national council of Awami League that begins tomorrow at the historic Suhrawardy Udyan.