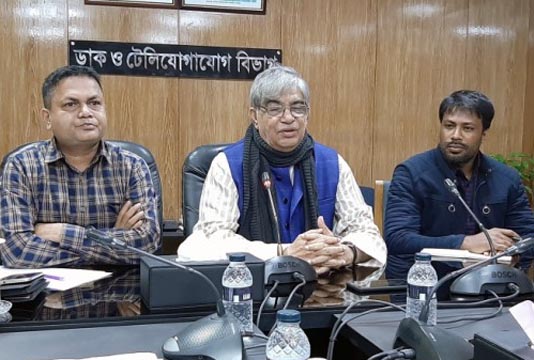 Posts and Telecommunications Minister Mustafa Jabbar today said Grameenphone (GP) must abide by the country’s law to operate their business, alleging the mobile phone operator was trying to pressurise government serving a “legal notice” over its outstanding dues to President Abdul Hamid.

“This is a situation which is not easily acceptable to us . . . this is very unfortunate,” he said in a meeting with Telecom Reporters’ Network Bangladesh (TRNB) at his secretariat office.

Jabbar added that all high ups of the government were informed by now about the notice while “we talked to legal experts regarding it”.

The minister’s comments came as GP’s parent company Telenor recently sent a notice to the Head of the State through a Singaporean law firm demanding arbitration over an audit dispute of Taka 12,580 crore.

“We are always open for arbitration but when someone goes to court, there is no scope of arbitration outside the court,” Jabbar said referring to the November 24 order of the Supreme Court’s Appellate Division.

The apex court on that day directed GP to pay Bangladesh Telecommunication Regulatory Commission (BTRC)Taka 2,000, an amount which is 10 times higher than what the operator was willing to pay as adjustable deposit to BTRC.
The apex court simultaneously ordered GP to pay the amount within the next three months adding that otherwise BTRC could take any measure against the operator which included appointment of administrators for the company.

“We are in the right track and the court has done its job accurately,” Jabbar said.

Asked if GP could seek any international court intervention after losing its case in Bangladesh, he said it was unlikely that the operator could get any benefit by doing so.

“I don’t believe that after losing in Bangladesh’s court, one could do something in any international court . . . the calculation is clear, they will have to run their business in Bangladesh,” Jabbar said.

He added: “No international court would give them any judgment through which the company could run its business violating the law of the land”.

The minister also revealed that another operator Robi was also trying to seek arbitration but they were doing so after withdrawing its lawsuit against BTRC.

BTRC earlier this year ran separate audits into the GP and Robi’s books from their inception until December 2014 and demanded Taka 12,579.95 crore and Taka 867.24 crore respectively from the two operators.