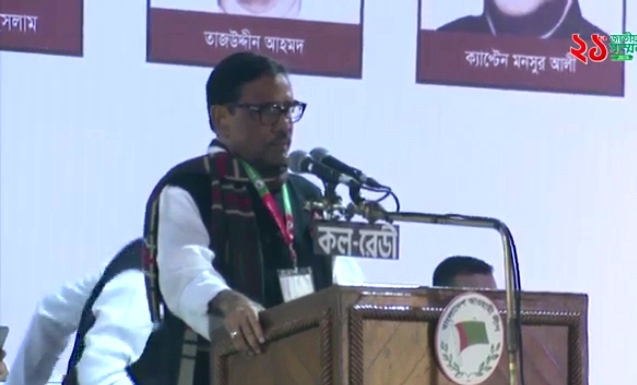 Noting that Awami League President and Prime Minister Sheikh Hasina has been the most popular political leader in the country for the last 44 years, AL General Secretary Obaidul Quader today said she has now been adorned with the stature of a global leader.

“Sheikh Hasina is now a world leader apart from a politician. As long as she will remain in power, the country will not lose its avowed path,” Quader said while addressing the opening session of the two-day national council of ruling Awami League here.

He said Sheikh Hasina is one of four industrious leaders in the world, while she has been the country’s most courageous, honest, skilled and popular politician for last 44 years.

Stressing the need for building the Awami League as per the commitments of its president, the AL general secretary said the party must be strengthened further. “We will build a militancy-free country. This is our today’s pledge,” he added.

Recalling the contribution and sacrifice of Father of the Nation Bangabandhu Sheikh Mujibur Rahman to the nation, Quader said Sheikh Hasina had started building the country standing on the ruins left after her father and most of her family members were killed in 1975.

“She made the AL united and established democracy in the country through a movement on a discipline way,” he said.

An unstable situation was created in the country after assassination of Bangabandhu, the AL general secretary said, but Prime Minister Sheikh Hasina brought the country into the track of development.

Urging the party grassroots leaders and activists to work sincerely to implement the thoughts and goals of the AL president, Quader said Sheikh Hasina is trying to fulfill every pledge she gave to the country’s people.

Mentioning that anti-graft drive began in the country under the leadership of Sheikh Hasina, he said all should work together to face the challenges of militancy and communalism.

The AL general secretary condemned the 15 August carnage when Father of the Nation Bangabandhu Sheikh Mujibur Rahman and most his family members were assassinated.