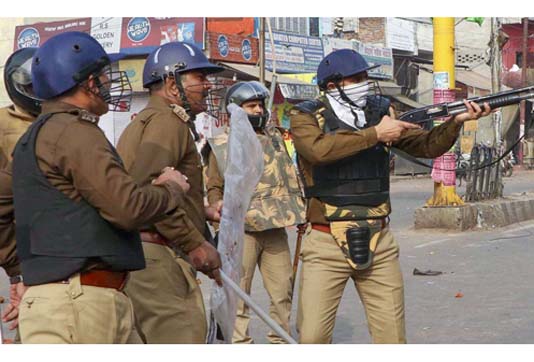 Six protesters were killed and several others, including three police personnel, injured today in violence that erupted across Uttar Pradesh (UP) over the contentious Citizenship Amendment Act (C.A.A).

Among the six, two protesters were killed in Bijnor while one each died in Sambhal, Firozabad, Meerut and Kanpur, media reports said quoting the state police.

However, Uttar Pradesh Director General of Police OP Singh claimed that none of the deaths had occurred due to police firing. “We did not fire even a single bullet,” he told news agency NDTV.

The protests had erupted across 13 districts of the state after the Friday prayers, with thousands defying statewide prohibitory orders to voice their opposition to the amended citizenship law on the streets.

Faced with large crowds and stone-pelting protesters, police resorted to lathi-charge and used tear gas to bring the situation under control.

Sporadic violence was reported from parts of Delhi, Maharashtra and Karnataka-Kerala border areas as well, while authorities resorted to curbs on mobile internet and SMS services in various regions, including in parts of UP, Karnataka and the national capital, according to PTI report.

Additional security forces were deployed in all sensitive areas, including those where large-scale protests took place on Thursday that also saw at least three deaths including of two persons in police firing in Mangaluru. One person had died in Lucknow.

Bihar Chief Minister and JD(U) leader Nitish Kumar asserted the National Register for Citizens will not be implemented in his state, while another BJP ally Lok Janshakti Party’s president Chirag Paswan said the protests show the central government has “failed” to dispel confusion among a significant section of society, the news agency reported.

Holding a protest march in Maharashtra, the All India Majlis-e-Ittehad-ul-Muslimeen (AIMIM) alleged the Narendra Modi government wants to ensure only Hindus remain in India with its twin move of the new Citizenship (Amendment) Act and the proposed countrywide National Register of Citizens (NRC).

The Congress accused the Modi government of being responsible for widespread protests in the country and demanded the contentious citizenship law be repealed. The main opposition party also pitched for dialogue with protesters.

In a televised message Congress President Sonia Gandhi said, “The BJP government has chosen to use brute force to suppress dissent. This is unacceptable in a democracy”.

“The Citizenship amendment Act is discriminatory and the proposed nationwide NRC will particularly hurt the poor and the vulnerable,” Mrs Gandhi added.

However, the home ministry in a whatsup message said the CAA won’t affect Indian citizen including the Muslims in any way. “No statute, including the CAA, can abridge or take them away”.