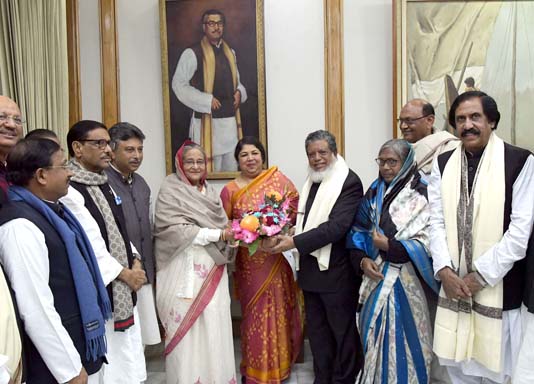 Prime Minister Sheikh Hasina today asked the Awami League (AL) leaders and workers to uphold the party’s ‘reputation and tradition’, saying that the party has a responsibility towards the people.

“Awami League is a party of the mass people and it has a responsibility towards them. So, you’ll have to keep up the organisation’s reputation and tradition and work in such a way so that its image is not tarnished,” she said.

Sheikh Hasina, who was reelected president of the AL for the ninth consecutive time today through the party’s 21st National Council, said this after the leaders and workers of the party and its associate bodies greeted her at Ganabhaban here this evening on her reelection as the AL president.

The AL president said “jara ure eshe jure boshe” (parties which are formed by staying in power) have no responsibility towards the country and the people.

The prime minister also instructed the party leaders and workers to uphold the trust and confidence of the people which they reposed on the party in the last elections.

“You’ll have to work by gaining the trust and confidence of the people and retaining the party’s image,” she said.

She also asked them to work for strengthening the party at the grassroots level further by discarding all differences.

“You’ll have to work with a mindset of sacrifice to further strengthen the organisation … any situation could be faced if the party is strengthened,” she said.

The AL president thanked and congratulated all concerned for completing the party council successfully and in a disciplined manner.

Sheikh Hasina also greeted the party councilors for reelecting her as the party president.

The AL president asked concerned districts to complete their respective councils fast where the councils are yet to be held.

In this connection, she warned that if they fail to hold the councils on time their committees will be dissolved.

Sheikh Hasina urged the leaders and workers of the party to read the books – “Bangabandhu’s Asamapta Atyajiboni”, “Karagarer Rojnamcha” and “Secret Document of Intelligence Branch on Father of The Nation Bangabandhu Sheikh Mujibur Rahman”.

“You could learn many things if you read these historic books properly and attentively,” she said.