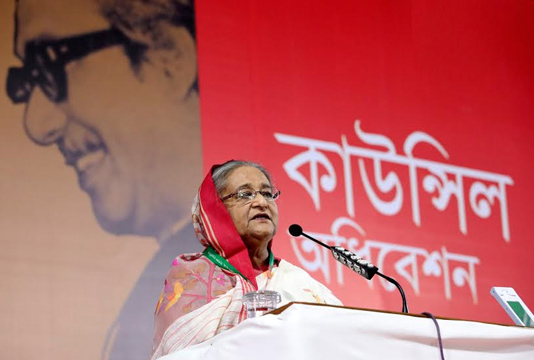 She said this while delivering her introductory speech at the council session on the second day of the ruling Awami League’s 21th National Council held at the auditorium of Institute of Engineers, Bangladesh (IEB) here. Sheikh Hasina, also President of the AL, simultaneously directed the party leaders and workers to play a more responsible role in the country and nation.

“You’ll have to keep up the confidence and trust of the people and work for fulfilling their hopes and aspirations,” she also said.

The prime minister said the grassroots leaders and workers will have to
work with sincerity. “Then, we could reach our desired goal and build Sonar
Bangla as dreamt by the Father of the Nation,” she added.

Sheikh Hasina asked the AL leaders and workers to continue working for the welfare of the people and the country, rising above the personal hopes and desires.

“It’s seen that after coming to power, many cannot retain their popularity. But we could do it and we earned the people’s trust and confidence, and I will tell everybody to work from this thinking,” she said.

The prime minister said the Awami League has changed the lot of the people by struggling against those who played ducks and drakes with the fate of the people for 29 years.

Paying tributes to Bangabandhu, Sheikh Hasina said the Father of the Nation dedicated his entire life for changing the lot of the Bangalee nation and putting the country in a dignified position in the world by establishing it as developed and prosperous one.

“Bangabandhu suffered jail and torture throughout his life for bringing smiles on the faces of the distressed people,” she said.

Sheikh Hasina said the Father of the Nation liberated the country by uniting the nation and strengthening the organization.

The prime minister said the Father of the Nation graduated the war-ravaged Bangladesh to a least developed country within only three and a half years. But after that, the nation fell into the disaster through the August 15 (1975) massacre, she said.

Sheikh Hasina said after the killing of Bangabandhu, the politics of coup, killing and conspiracies started in the country where ‘curfew democracy’ was imposed eliminating democracy.

The prime minister said the people of the country for the first time realized, after the Awami League assumed office, that they can get services of the government and it can ensure welfare of the people and change their lot.

“Those who grabbed power illegally by violating the constitution were busy with changing their own fortunes and they did not think about the people’s welfare,” she said.

Sheikh Hasina said the military dictators destroyed the society by initiating the loan default culture and unleashing militancy, drug peddling and corruption and handing over arms to the meritorious students.

Highlighting the country’s tremendous socioeconomic development and progress in the last one decade, the prime minister said her government has been implementing the 10-year perspective plan to establish Bangladesh as a middle income country.

“We’ve also adopted the 20-year perspective plan to turn Bangladesh into the most developed and prosperous country in South Asia by 2041,” she said, seeking cooperation of all to achieve the goal.