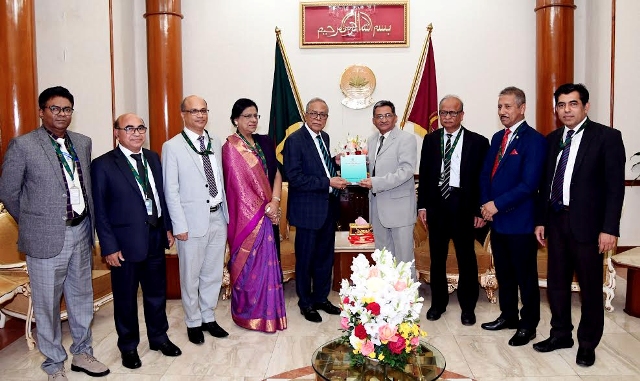 President M Abdul Hamid today asked the University Grants Commission (UGC) to play its due role to ensure proper academic environment and quality education in the universities of the country.

“Take necessary steps to make education more time-befitting at all public and private universities,” the President said while a UGC delegation led by its Chairman Prof Dr Kazi Shahidullah submitted the Annual Report-2018 to him at Bangabhaban here this afternoon.

President Hamid, during the meeting, also stressed the need for setting time-befitting and world-standard academic curriculum to acquaint the graduates with the global competition.

The head of the state urged the UGC authority to consider adoption of an identical teachers’ appointment policy as over 150 public and private universities are running their academic activities.

President Hamid was apprised by the UGC chairman of different activities of the university, including various infrastructural development, curriculums and various aspects of the report.

The UGC chairman informed the President about holding admission tests at seven agricultural universities as per the cluster system, which helped admission seekers and their guardians to reduce their sufferings.

He told the President that they have taken a strategic plan to introduce a uniform appointment policy for pro vice-chancellors and treasurers of the universities.

The UGC will set up a quality and time-befitting research centre, Prof Shahidullah added, seeking the President’s all-out cooperation in this connection.

Abdul Hamid gave a patient hearing to the delegation and assured them of his overall cooperation.

Secretaries concerned to the President were present.