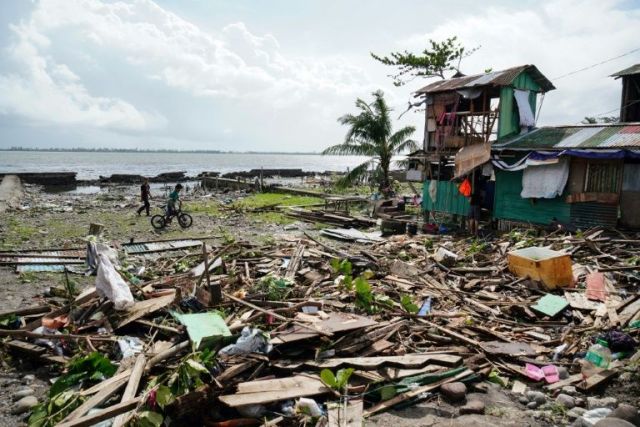 The number of deaths from a powerful storm that hit the Philippines on Christmas has climbed to 41, authorities
said Sunday, with tens of thousands still in evacuation centres. Typhoon Phanfone left the Philippines on Saturday after devastating several islands in the central Visayas, including popular tourist destinations, but the extent of the damage continued to grow as assessments came in.

The death toll of 41 — up from 28 on Friday — included three boat crew who died after their vessel capsized due to strong winds, a policeman electrocuted by a toppled post, and a man struck by a felled tree. “We’re hoping that there will be no more fatalities,” national disaster agency spokesman Mark Timbal told AFP, with authorities still searching for 12 people missing.

The latest agency report showed over 1.6 million people were affected by the typhoon, which damaged over 260,000 houses and forced almost a hundred thousand people to flee to emergency shelters. Many of the affected residents in the predominantly Catholic nation celebrated Christmas in evacuation centres, where they may have to stay until the New Year given the scale of destruction.


The government estimated that the storm has caused damage to agriculture and infrastructure worth $21 million. Power lines and internet connections remain down in some areas after Phanfone’s powerful wind gusts of up to 200 kilometres (124 miles) per hour toppled electric posts and trees.

Typhoon Phanfone, locally called Ursula, is the 21st cyclone to hit the storm-prone Philippines, which is the first major landmass facing the Pacific typhoon belt. Many of the storms are deadly, and they typically wipe out harvests, homes and infrastructure, keeping millions of people perennially poor.