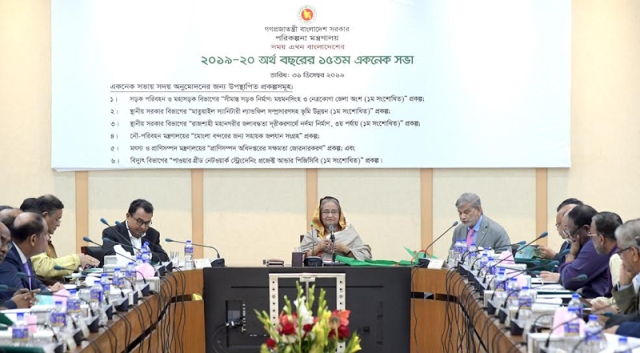 The Executive Committee of the National Economic Council (ECNEC) today approved a Taka 767.25 crore project for procuring ancillary marine vessels for the Mongla Port in a bid to handle properly the growing number of ocean going ships.

The approval came from the 15th ECNEC meeting of the current fiscal (FY20) with ECNEC Chairperson and Prime Minister Sheikh Hasina in the chair held at the NEC Conference Room in the city’s Sher-e-Bangla Nagar area.

Briefing the reporters after the meeting, Planning Minister MA Mannan said that a total of 7 projects were approved today involving an overall estimated cost of Taka 4,460.54 crore. “Of the total project cost, Taka 4,346.40 crore will come from the Government of Bangladesh portion while Taka 114.14 crore from concerned organization’s own fund.”

Of the approved 7 projects, 3 are new while 4 others are revised projects.

The Planning Minister said the Mongla Port Authority under the Ministry of Shipping will implement the procurement of ancillary marine vessels project for the Mongla Port to be completed by June 2022.


The main objectives of the project are to ensure safe channel at Mongla Port, properly handling the ocean going vessels and conducting emergency rescue operation during disasters and inclement weather.

The main project operations include procurement of one pilot mother vessel, two tugboats, one search and rescue vessel, one survey and research vessel, one laying vessel and other necessary equipments.

The Planning Minister said Prime Minister Sheikh Hasina opined that all kinds of bulk goods should be transshipped through this Port while this Mongla Port has a very bright prospect of exporting the transit goods of India, Bhutan and Nepal.

According to the Planning Commission, this Mongla Port has a bright prospect of handling around 1200 ships every year and for this there is a need for ensuring round the year navigability of 145 kilometer channel of the port.


Once the project is implemented, the capacity of Mongla Port will increase a lot as this Port is expected to handle 8.72 lakh TEUs containers by 2025 which is expected to rise by 45.32 lakh TEUs by 2049 as well as more than 30,000 cars.

The Planning Minister said the government has certain goals to upgrade the all inter-district roads and regional highways into four-lanes, construction of necessary flyovers, and to construct roads along the entire bordering area of Bangladesh.

The Premier also asked the Ministry of Shipping to keep special attention so that no dredging work is conducted along the River banks to evade erosion. Sheikh Hasina also underscored the need for installing modern and latest scanner machines at the land ports and river ports so that no banned or illegal items could get access.