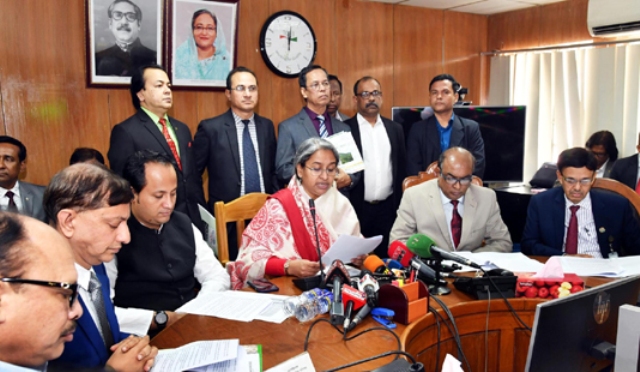 Dipu Moni said the government is carrying out various transformations to bring a qualitative change in the education sector, which will supplement to the efforts of achieving the target of SDG (Sustainable Development Goal)-4 by 2030.


“As part of the transformation initiatives, we have already introduced evaluation system on different subjects including physical education and health, work-oriented education, home science, fine arts and handicrafts at JSC and JDC examinations,” she added.

The number of GPA-5 achievers under nine general education boards is 76,747 while the figure in the madrasa education board is 1682. A total of 5,243 educational institutions achieved 100 percent pass rate in this year’s JSC and JDC examinations, while the number was 4769 last year.


Of those, 327 institutions are from Dhaka, 820 from Rajshahi, 239 from Cumilla, 496 from Jashore, 102 from Chattagram, 783 from Barishal, 176 from Sylhet, 284 from Dinajpur and 173 from Mymensingh while 1843 are under Madrasah Education Board. A total of 3400 schools under nine general education boards achieved 100
percent pass rate in this year’s JSC examinations, while the number was 3559 last year.

A total of 432 students from nine educational institutions appeared in the examinations this year. Among them, as many as 53 examinees got GPA-5. Students of 33 schools and madrasas under five out of 10 Education Boards failed to pass in this year’s JSC and JDC examinations. The number of zero pass rate institutions is 2 in Dhaka Board, 2 in
Rajshahi Board, 9 in Dinajpur Board, one in Mymensingh Board and 19 in Madrasah Education Board. The number of schools and madrasahs with `zero results’ was 43 last year.

Percentage of pass of female students under 10 education boards is 88.04 this year while male is 87.03, according to the results published today. As many as 11,95,800 male examinees appeared in the examinations while the
number of female candidates is 14,06,253.

Female examinees have outnumbered their male counterpart in terms of achieving GPA-5. As many as 39,905 female students got GPA-5 last year while the number of GPA-5 holder male students were 28,190. Barishal Education Board has secured the top position among 10 education boards with 97.05 percent pass rate in the JSC and JDC examinations this year.


Dhaka education board was at the bottom of this year’s JSC and JDC examination results in terms of pass rate. Percentage of pass of Dhaka Board is 82.72 percent while Barishal Board secured top position with 97.05 percent success rate.