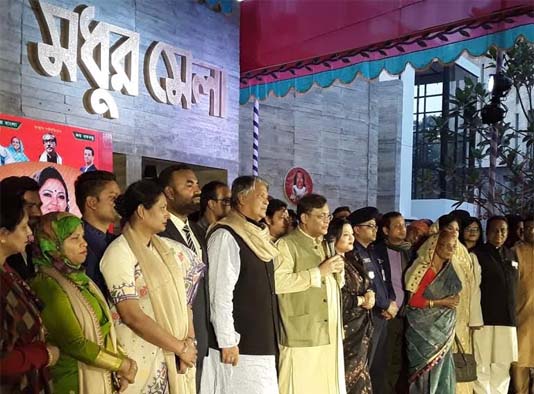 Mystic Baul songs quenching the thirst of peoples’ minds are keeping the country’s core culture alive at a time when the sky culture is penetrating everywhere with its all-engulfing throes.

“Folk and Baul songs are our root. Such kinds of song speak of our lives and souls,” he said, adding all songs cannot purify human minds and do not go with “our” culture.

It is the unique characteristic of the Baul songs that the song of two-string instrument is still making its presence in the country when the sky culture and modern musical instruments are dominating the domain of music, the minister added.


Hasan thanked renowned folk singer and lawmaker Mamtaz Begum on behalf of him and his party Awami League for organizing such fair that has drawn Baul singers from far-flung areas of the country.

She (Mamtaz) has been organising the fair in memory of her father Modhu Boyati since his death.

Mamtaz has built a museum here in memory of her father, the information minister said.

Mamtaz presided over the programme while Chairman of the Manikganj District Council Advocate Golam Mohiuddin also spoke as the special guest, among others, on the occasion.

Later, Hasan planted a sapling on the fair premises.

“The country has been digitised under the pragmatic leadership of Prime Minister Sheikh Hasina, but now the time has changed…in the past, people of the country were scarcely seen putting shoes on their feet, but now they use shoes”, he added.

He went on saying “Earlier, people, who lived abroad, could not talk to their near and dear ones, but now they can easily talk to the close ones. This is called Digital Bangladesh”.

To further speed up the current development trend of the country, the information minister, said the country needs the leadership of Prime Minister Sheikh Hasina and her government to continue.
https://english.dainiksomoysangbad24.com/pm-opens-free-textbook-distribution/
(BSS)