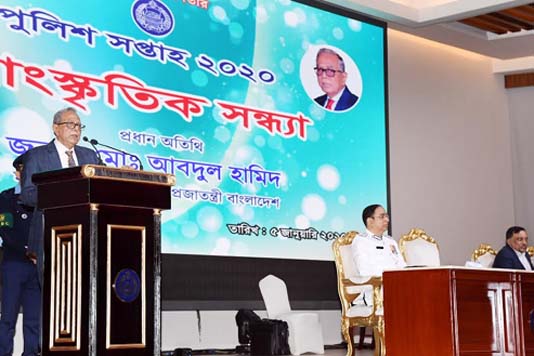 President M Abdul Hamid today directed Bangladesh police to work for the people of the country. “Police are for the people . . . so work for them,” the President told a function organised on the occasion of ‘Police Week-2020′ at Police Auditorium, Rajarbagh Police Lines here this evening.

The head of the state suggested the police personnel to perform their duties sincerely being imbued with the spirit of Liberation War and Independence. Noting that people go to police seeking their help, Abdul Hamid said, “Ensure services to the people and provide expected remedy to the service-seekers. The people will begin to think them (police) as their friend’. “People’s support is also mandatory to combat crimes,” he added.


Terming the Bangladesh Police a prideful institution, the President recalled that different outstanding contributions of police to 1971 Liberation War of the country. President also enjoyed a cultural function and attended a dinner.