Iraqi MPs to meet on US troop ouster after Soleimani killing 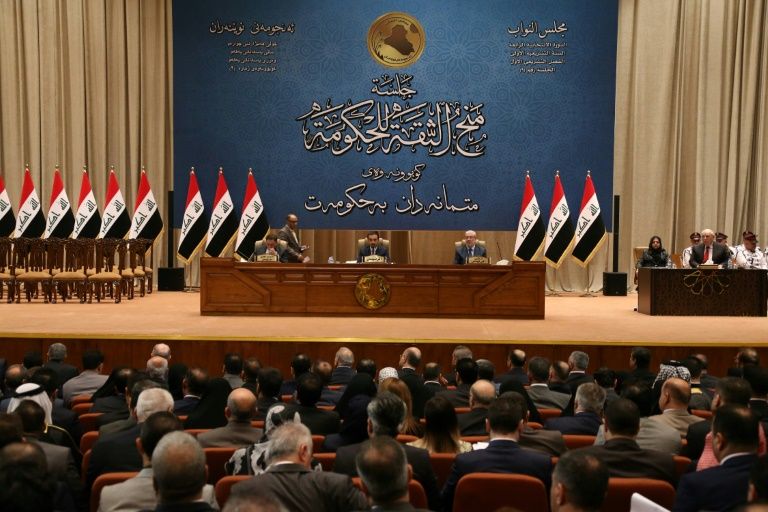 Iraq’s parliament was expected to vote Sunday on ousting US troops from military bases, which are threatened by pro-
Tehran factions after an American strike killed top Iranian and Iraqi commanders.

Late Saturday, missiles slammed into the Baghdad enclave where the US embassy is located and an airbase north of the capital where American troops are deployed, prompting US President Donald Trump to threaten strikes on 52 sites in Iran.

The near-simultaneous attacks seemed to be the first phase of promised retaliation for the US precision drone strike that killed Iran’s Major General Qasem Soleimani and Abu Mahdi al-Muhandis, deputy head of Iraq’s Hashed al-Shaabi.


While no one claimed Saturday’s attacks, a hardline pro-Iran faction in
the Hashed, a network of Shiite-majority armed groups incorporated into the
state, urged Iraqis to move away from US forces.

“We ask security forces in the country to get at least 1,000 meters away
from US bases starting on Sunday at 5:00pm (1400 GMT),” said the Kataeb
Hezbollah faction.

The deadline coincides with the planned conclusion of a parliamentary
session on Sunday which the Hashed has insisted should see a vote on the
ouster of US troops.

Some 5,200 US soldiers are deployed across Iraqi bases to train and
support local troops to prevent a resurgence of the Islamic State jihadist
group.

They are deployed as part of the broader international coalition, invited
by the Iraqi government in 2014 to help fight IS as it swept across Iraqi
territory.

The Hashed, whose Shiite-majority factions have close ties to Iran, has
vehemently opposed their presence for months.

Its hardline members and its political branch, the Fatah bloc, have called
on parliament to revoke the invitation.

The 329-member parliament is set to meet at 1:00pm local time (1000 GMT)
and while no agenda has been published, many lawmakers are pushing for a vote
on the foreign troops.

“We either vote on the occupation forces leaving, or we remain
subservient, robbed of our will and dignity,” said Fatah MP Ahmad al-Kinany.

“Any parliamentarian absent for the vote on the departure of the occupier
will have betrayed his country,” he said.

While praying over Muhandis’ remains in Baghdad on Saturday, Fatah head
Hadi al-Ameri pledged to avenge him.

“Be reassured that the price of your pure blood will be the departure of
American troops from Iraq, forever,” he said.


US defence officials in Iraq told AFP in the hours ahead of the session
that they felt apprehensive and nervous.

As Saturday’s rocket attacks unfolded, coalition planes were heard
circulating above their bases in Kirkuk province, AFP’s correspondent there
said.

“Through his allies in Iraq, Qasem Soleimani had sought the departure of
US forces,” said Tom Warrick, a former US official and current fellow at the
Atlantic Council.

“If US forces do end up withdrawing, it could grant Soleimani a post-
humous victory,” Warrick told AFP.

The US strike on Baghdad international airport early Friday killed a total
of five Iranian Revolutionary Guards and five members of Iraq’s Hashed.

After a procession that made its way across various Iraqi cities on
Saturday, the remains of the Iranians, plus those of Muhandis and another
Hashed member, were flown to Iran.

DNA testing was required to separate the Iraqis’ remains from the Iranians
so they could be properly buried, the Hashed said.

As head of the Guards’ foreign operations arm, the Quds Force, Soleimani
was a powerful figure domestically and oversaw Iran’s wide-ranging
interventions in regional power struggles.

US President Donald Trump had said Soleimani was planning an “imminent”
attack on US personnel in Baghdad and should have been killed “many years
ago”. Iran’s supreme leader Ayatollah Ali Khamenei promised “severe revenge”
for Soleimani’s death and Tehran named Soleimani’s deputy, Esmail Qaani, to
succeed him.


The attacks on Saturday evening appeared to be precisely the reaction
Iraqis had long feared: tit-for-tat strikes between the Hashed and the US on
Iraqi soil.

“This is no longer a proxy war,” said Erica Gaston, a non-resident fellow
at the New America Foundation.

“What you have is America attacking an Iranian general directly, and
groups are now openly fighting for Iran to avenge him. This is a direct war,”
she told AFP.
(AFP)