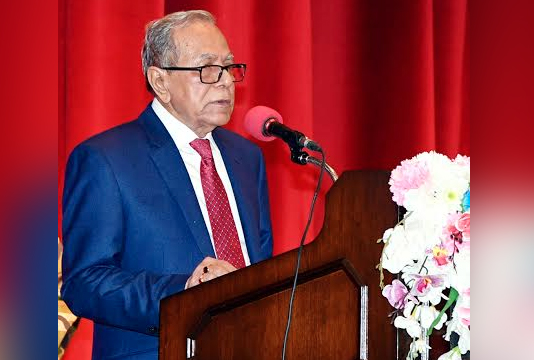 President M Abdul Hamid today issued a note of warning against the corrupt individuals, asking police personnel to start anti-graft drive from their respective places. “Start anti-corruption drive from your respective places,” the President said while addressing a pre-dinner function for the high officials of the police force at the Durbar Hall of Bangabhaban here marking the ‘Police Week 2020’.

The corrupt practices pushed the country backward, he said, vowing that the corruption must be eradicated from the country as well as society at any cost.

Hailing the incumbent government’s ongoing drive against graft, President Hamid said the drive would continue in days to come.


He asked police to become more efficient in using modern technology to combat crimes, an earnest necessity to follow as the nature of criminal activities is frequently being changed globally.

“Fanaticism, militancy, terrorism, transnational crime, organized crime, money laundering, cyber crime and other criminal activities are on the rise . . . Besides criminal gangs are extracting money from different financial institutions through the forgery of credit and debit cards,” he observed.

Noting that police personnel have to fight against the crimes of virtual world alongside the real world, President Hamid said the dishonest quarters are committing offenses using the internet-based social media platform and different apps, and spreading rumours and hackings.

The head of the state lauded the outstanding performance of police force in bringing the militancy under control, which got appreciation both at home and abroad.

President Hamid put emphasis on creating mass-awareness and taking a comprehensive initiative to root out militancy from the country.

The President urged police personnel to serve the country and its people with utmost patriotism, honesty and sincerity being imbued with the spirit of the Liberation War.


He also sought everyone’s active participation in materializing the “Vision-2021” and building a safe, happy and developed “Digital Sonar Bangla” as envisioned by Father of the Nation Bangabandhu Sheikh Mujibur Rahman.