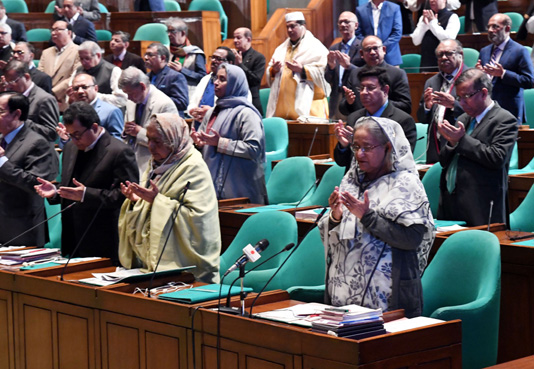 Taking part in a discussion in the Jatiya Sangsad on an obituary reference adopted for Gaibandha-3 constituency lawmaker Yunus Ali Sarker, she said, “This time, there were very important personalities in the list of deaths. All of the people died this time gave something to the society. I pray for eternal peace of their departed souls and conveyed deep sympathy to the bereaved family members.”

The premier recalled with due respect the deaths of former Awami League lawmaker Advocate Fazilatun Nesa Bappy, founder of the world’s largest non-government development organisation BRAC, Sir Fazle Hasan Abed, PM’s military secretary Major General Mia Mohammad Zainul Abedin, Architect Rabiul Hussain, eminent diplomat Syed Muazzem Ali and Islamic Scholar Shaikhul Hadith Allama Ashraf Ali.
Recalling Yunus Ali Sarker’s contribution to the field of politics and social service, she said, “I knew him from his student life and he came from the student politics. He served the people free of cost as a physician going door to door. He stood by the people. We have found him active in all the movements and struggle as well.”


Yunus Ali died at the Bangabandhu Sheikh Mujib Medical University (BSMMU) Hospital at the age of 67 on December 27 last year.

About the death of Fazilatun Nesa Bappy, the premier said she was a lawmaker of the ninth and 10th parliament and a member of the Jubo Mohila League.
She said Bappy had a brilliant future in the politics and she was a brilliant orator.

Appreciating Bappy’s role during the emergency, the premier said, “She (Bappy) was involved in dealing the cases filed against me when I was sent to the jail after the Caretaker Government took office and declared emergency in 2007.”

Recalling the contribution of founder of the world’s largest non-government development organisation BRAC, Sheikh Hasina said, “He was an NGO activist, his work had brightened the image of Bangladesh in the world.”

The premier added that she knew Fazle Hasan Abed, saying, “His wife was an active activist of the Awami League. I requested him to establish a bank and a university after coming to power for the first time. I gave approval of the organizations to run.”

The premier said Zainul had been tortured by the BNP government as he served her (PM) as military secretary as she was out of power for seven years, adding, “I took him again as my military secretary after assuming office in 2009. He was like a family member of us.”

Recalling architect Robiul Hussain, she said, “He was not only an architect, but also an eminent poet and litterateur and was a member of the Bangabandhu Trust.”

About death of Syed Muazzem Ali, the premier said, “He was an efficient diplomat. He was last posted as High Commissioner of Bangladesh in India. He performed his duties with utmost efficiency in India in line with the Bangladesh’s foreign policy “Friendship to all, malice to none.”


The premier also recalled the role of Islamic scholar Shaikhul Hadith Allama Ashraf Ali to in getting government endorsement to Qwami Madrasa certificate.