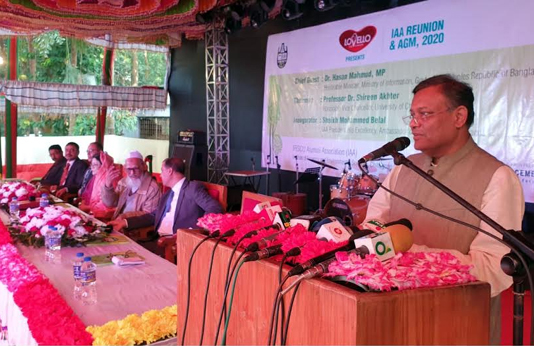 Information Minister Dr. Hasan Mahmud said the tree-enriched areas of the country was 19 percent before 11-12 years but now it stands more than 24 percent and at the same time, the population of the country has increased at same percentages. He mentioned the infrastructures of the cities and district towns have gradually expanded and so our government should preserve the forest areas and natural beauties to help facilitate the environment.

Dr Hasan also joint secretary of Awami League (AL) said Bangladesh is a very small country and most densely populated where more than 1100 people reside in one square meter areas. He mentioned that the per capita agriculture land in Bangladesh is minimum level and despite the minimum agriculture lands, Bangladesh became self sufficient in food productions which is rare example across the world and as well as it is also a case study of World Food Organization.


He said these as chief guest while addressing the reunion function of the Institute of Forestry and Environmental Science Alumni Association of Chattogram University (CU) this noon. He said effect of climate change is visible and per capita land is at minimum level in our country and how we have attained self-sufficiency in food production is a miracle to the world community.

It became possible because of country’s land is very fertile and percentage of biodiversity is very high as well as good governance of the under the leadership of Prime Minister Sheikh Hasina. Dr Hasan expressed dissatisfaction over the hill cutting in the name of development of communication sector.

The Information minister said government organizations should be more careful to save the environment and some government agencies would not look after the environment cause properly. He expressed strange mentioning that a responsible government body like Chattogram Development Authority cuts down 300 feet high hills beside Asian Women University for creating a new road which gives me pains severely.


The Minister also told that the beauty of Chattogram is naturally enriched hills and the development works of the city may be done preserving the hills. But the government agency like CDA, two years earlier indiscriminately cut down the hills for road development which is not acceptable at all. He urges the concerned bodies to keep it mind not to damage natural beauties for any development works in the city to sustain the eye-catching natural beautifies of Chattogram.

Dr. Hasan Mahmud attended the reminiscence and said I was the student of CU and whenever I get calls from the university, I never miss the call of the CU. He said I had intention to visit whole campus of the university but time did not allow me and I had to leave the function immediately. Dr. Hasan in his reminiscence urges the CU authority to plant trees in the campus and mentioned about the birth of his two sons in Belgium. He sets example of tree plantations in Belgium.


He said a new sapling is to plant in the name of new-born baby and hanged a nameplate before the name of baby and such type of tree plant would not be cut any more until the baby grown up and may trace the tree named after his name. He urges the CU authority to plant sapling of trees in the name of any new born baby in the campus residences and an area for the purpose should be specified.

Dr Hasan said CU has enough lands under its jurisdiction and can easily comply this proposal easily than the other universities. Former Forest & Environment Minister Hasan Mahmud said drought still is existing in some places in Africa and Australia and country like Pakistan is experiencing floods due to hike of one degree Celsius. He mentioned about the savageness of climate change if it go up three to four degree Celsius.


The Info Minister mentioned that we are facing the challenges of climate change effects and facing the natural disaster in the meantime. He mentioned that the posh areas of Agrabad commercial hub where residents are facing immense sufferings of tidal water and in rainy season, the entire areas go under water caused the traffic and pedestrian movement.