Govt working to bring all under internet coverage: Joy 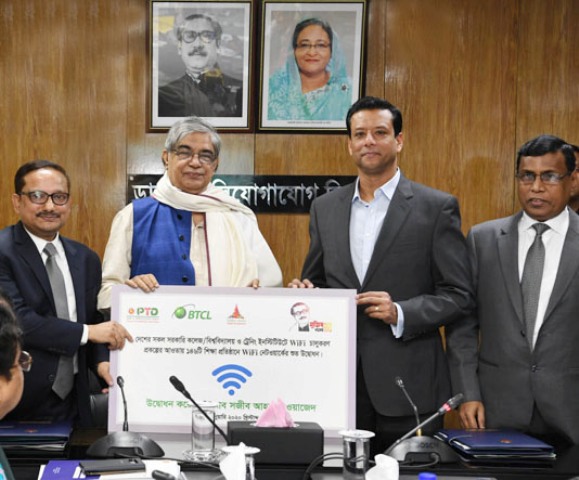 Prime Minister’s ICT Affairs Adviser Sajeeb Wazed Joy today said the government has been working to bring the country’s all people under internet coverage. “When we began the journey of Digital Bangladesh, only 0.3 per cent people had internet connection. Today, 60 per cent people are enjoying internet facilities,” he told the launching ceremony of Wi-Fi zone at different government educational institutions in the country at Posts and Telecommunications Division conference room.

On the occasion, 10 Mbps (megabits per second) Wi-Fi facilitates have been launched at 146 government colleges and universities of the country including the capital Dhaka under the “Installation of Optical Fiber Cable (OFC) Network at all Govt. College or University and Training Institute Project” of Bangladesh Telecommunications Company Limited (BTCL). The prime minister’s adviser said the government has brought 10 crore people under internet coverage in the last 10 years.


In the first year since launching of Wi-Fi zone, the concerned educational institutions will get 10 Mbps bandwidth free of cost. If required, more than 10 Mbps bandwidth will be provided. The project will be implemented by June this year at a cost of Taka 45 crore. Among the 587 institutions, 143 in Dhaka division, 35 in Mymensingh, 107 in Chattogram, 45 in Barishal, 83 in Khulna, 85 in Rajshahi, 56 in Rangpur and 33 in Sylhet.

In phases, Wi-Fi facilities will be provided to private colleges, universities and later schools and other educational institutions as well.
(BSS)