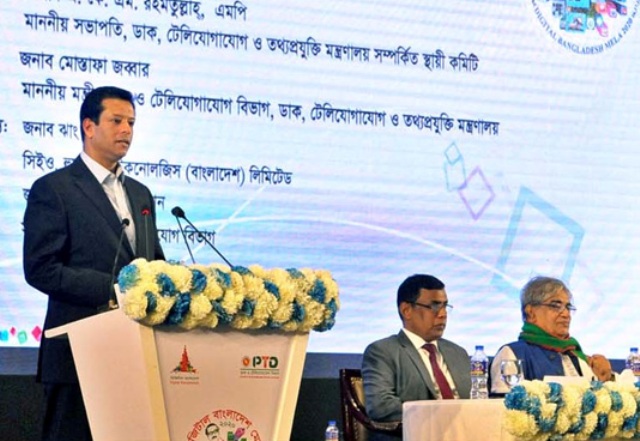 Joy, however, said it was difficult to assess the actual volume of ICT exports as most of the export-bound services in the sector were made through the internet. “(But) we believe that there is at least another one or two billion US dollars in export that is happening through the internet that is not being tracked,” he said.


Joy added that the scenario reflected that the ICT sector was very well on its way to catch the garments industry as Bangladesh was exporting hardware as well that included mobile phones, televisions and smart devices and “the exports were growing very rapidly and exponentially”. The PM’s adviser said some of the progresses in the sector could not been imagined even a decade ago when Bangladesh used to import all mobile phones.

Joy said the mobile phone operators earlier could not launch 3-G or 4-G technologies in the country before because of the lack of technological supports like fiber optic backbone and user demands. “Our Awami League government, the way we preceded to look at each problem, we thought if we have to make something a reality, we will have to find solutions to the problem and by solving the problem we could help the country progress,” he said. Bangladesh then, he said, started producing analogue mobile phones to provide the device to people at low cost so everybody could afford to buy a mobile phone.

Joy said the joint venture mobile phone companies, including Samsung, are maintaining higher quality in producing mobile phone in Bangladesh compared to many other countries like the Philippines. “Samsung is offering longer exchange warranty on smart phones being produced and exported from Bangladesh than the same phones from the Philippines,” he said.

The PM’s adviser said: “That is why I am very hopeful. Today I believe anything is possible in Bangladesh.” Joy also expressed his hope that the country will roll out 5G technologies along with the rest of the world. “The Awami League government pledged to launch 5G within this term. We launched 3G in our first term and 4G in second term,” he said.

The PM’s adviser said today the world is undergoing through the 4th industrial revolution, moving from an industrial age of manufacturing to a knowledge-based industry, knowledge-based products and services. “And our goal is that Bangladesh will be part of that revolution,” he said. Joy said the Awami League government had pledged to transform Bangladesh into a middle income country and “within our previous term, we actually met all of the United Nations and the World Bank criteria to gradate to a middle income country,” he said.


“We are middle income country now and we are just waiting for the official certification,” he added. He said today Bangladesh is one of the largest consumers market in the world and this has been the result of the country’s growing middle class over the last 11 years.

Bangladesh is becoming also one of the largest consumers of technology and data, he said adding that the volume of data that is being used today is much higher than that of 11 years ago. The volume of data use will reach skyrocket within next 5 to 10 years, he added.

Today, Bangladesh is a pioneer in digital governance as every service is being digitized in the country, he said adding that “We have a complete plan to make 100 percent digitization of the governance and we are very well on our way,” he said.


Sharing his experience in the USA, he said Bangladeshi national ID (smart card) is far more advanced than any ID of the USA. A total of 82 firms, including ISPs, are showcasing broadband internet, triple play technology (land phone, internet and cable TV connection in single cable), mobile apps, parental control and other technologies. Different ministries, divisions and departments of government are highlighting their progress in the field of digitization in some 25 stalls, 29 mini pavilions and 28 pavilions set up in the fair.

In addition, the fair had a separate corner for Bangabandhu, where life of the Father of the Nation Sheikh Mujibur Rahman is being portrayed through digital technology.
(BSS)