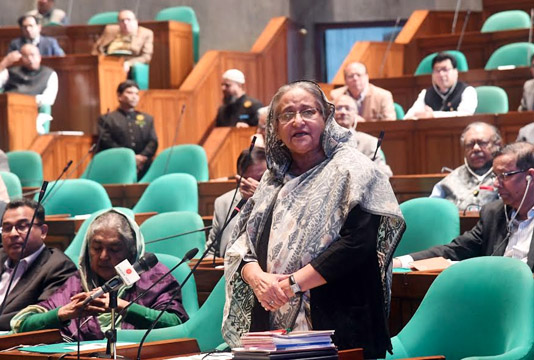 Prime Minister and Leader of the House Sheikh Hasina paid tributes to late Awami League (AL) lawmaker Abdul Mannan, saying that student leaders like him made immense contributions to restoring democracy after the assassination of Bangabandhu in 1975.

“Abdul Mannan was an efficient and brilliant politician and his death is a great loss for the country and the party,” she said while participating in a discussion on a condolence motion on Abdul Mannan in the House.

The premier said the government has been able to develop the country as student leaders like (Abdul) Mannan worked a lot through struggle.

“I got Abdul Mannan as a student leader when I returned home in 1981, and made him the president of Bangladesh Chhatra League in 1983,” she said.


Abdul Mannan, who was elected MP from Bogura-1 (Sariakandi-Sonatola) constituency, died of a cardiac arrest at a hospital in Dhaka on Saturday at the age of 67.

Speaker Dr Shirin Sharmin Chaudhury moved the condolence motion in the House at the beginning of day’s business.

“He had the organisational capacity and he demonstrated it,” she said.

She went on saying: “Mannan played a strong role in all movements of the country including anti-Ayub movement and the movements against Zia, Ershad and Khaleda Zia.”

The premier said he was included in the Awami League and given the posts of the publicity and organising secretary of the party due to his organisational capacity.

Sheikh Hasina said Abdul Mannan was given nomination to contest elections from a Bogura constituency which was a remote and under-developed area. “He was elected MP for three consecutive times,” she said.


The premier recalled that few days before his death, Mannan came to her and had a long talk over various issues.

She said it seemed to her that Mannan was not happy as he did not get any post in the AL central committee after the just- concluded council.

“I told him that he was not excluded, he was in the AL … I gave him nomination (for MP election) and he became an MP,” she said.

She added: “While talking to him, I saw his physical condition was not good and I advised him to go for a thorough checkup.”

Sheikh Hasina said that when Mannan was undergoing treatment in the hospital, she every day enquired about his health condition from the doctors.


The Leader of the House said that it was very painful for her to see the death of Abdul Mannan as he was an efficient and brilliant politician.

“Whenever I gave him any task, he accomplished it efficiently … it’s painful for me when I see the demise of such leaders that I groomed,” she said, adding it is a great loss for the country and the party as well.

Sheikh Hasina prayed for eternal peace of the departed soul of Abdul Mannan and conveyed profound sympathy to the bereaved family.
(BSS)