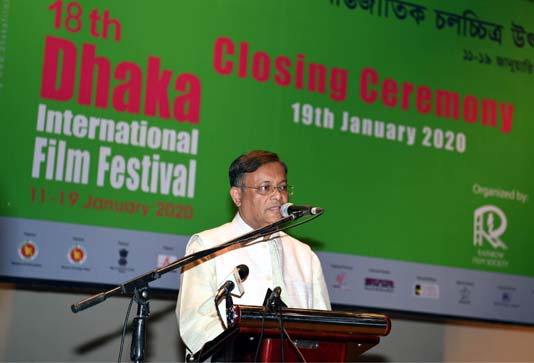 The world is advancing in a quick pace day by day as people are becoming mechanical due to conditions surrounding them, said the minister while addressing the closing ceremony of 18th Dhaka International Film Festival at National Museum.

Loss of human values and natural aptness is pushing the people to become self-cantered and only to think for themselves not even for their families or the society, he said.

Hasan said film portrays life and the society as it works as the mirror of the society.

The minister said to make better society or a better world film has a tremendous role today. So, necessity of good films is much needed nowadays than ever, he added.

Hasan said people visited the Moon fifty years back and today they are trying to go to the Mars. And they have already succeeded in sending human-less vehicles to the Mars, he said.


The minister said, “Our goal is to turn the country into a developed one by 2041. Through the material development, a country can be developed but I think we should make a good and enlightened nation too”.