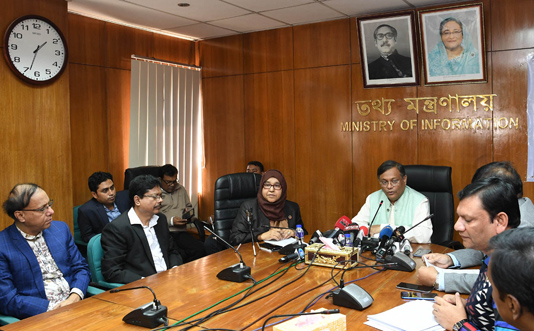 Information Minister Dr Hasan Mahmud today said BNP was enjoying an extra advantage in the campaign for the upcoming mayoral polls in the capital as law did not bar their top leaders to seek votes unlike those of the ruling Awami League.

“As per the electoral code of conduct, ministers and MPs who are enjoying government facilities cannot take part in the election campaign. BNP remains in an advantageous position in this regard,” he told a media briefing at his ministry’s conference room. Hasan said in most other parliamentary democracies including India and the UK, ministers and lawmakers could take part in polls campaign without using the government facilities “but, in Bangladesh, it is not possible”.


“So under current circumstances, they are in a much better position than Awami League,” he said, rejecting BNP’s allegations about the absence of a level playing field. Hasan said BNP was out to make the city polls questionable as they try to do so in other polls as well realizing “the countrymen are not with them”.

Replying to a query on the long-awaited judgment in the sensational Chattogram mass-killing case in 1988 that killed 24 people, Hasan, also joint general secretary of Awami League, expressed his satisfaction over the verdict.

Hasan also demanded to bring the kingpins under book who gave order from Dhaka to attack on the mass rally of Awami League President and incumbent Prime Minister Sheikh Hasina, who was proceeding with a motorcade procession
to attend a grand rally at Lal Dighi Maidan of Chattogram on January 24, 1988.


The Minister also expressed his satisfaction over the verdict in a case lodged over murder of five people in bomb attack at a rally of Communist Party of Bangladesh (CPB) in the capital in 2001. About the court order on granting anticipatory bail to Bangla daily Prothom Alo editor Matiur Rahman in a case lodged over the death of student
Naimul Abrar Rahat, the minister said it is proved that the court and the law are working independently.

While addressing the view-exchange meeting, Hasan urged the film producer to play their role in shaping the minds especially of younger generations and middle class family with positive and pro-active outlook. “The media has a
big influence in this regard . . . I urge you to shape particularly the young minds to think positively for nation building,” he added.

The minister said, “Film portrays life and the society as it works as the mirror of the society. To make a better society or a better world, film has a tremendous role today. So, the necessity of producing good films is a much needed demand nowadays.” He said the government’s aim is to bring back the golden period of country’s film industry and capture the global cinema market. “The barren period of our film industry is over . . . A number of good and quality films have been produced in the recent years,” he added.


Terming the film industry ‘one of the oldest media in Bangladesh’, Hasan said the industry started its journey on April 3, 1957 at the initiative of Father of the Nation Bangabandhu Sheikh Mujibur Rahman. The minister said many cinema halls across the country were closed as the mass people stopped going to cinema halls.

“The present government under the supervision of Prime Minister Sheikh Hasina has taken various initiatives to make the industry vibrant. Now the barren period is over. I’ve already talked with the Bangladesh Bank authority for offering easy and long-term loans for the cinema hall owners,” he added. Besides, the minister said the work of forming welfare trust for the artists of the film industry is going on.
(BSS)