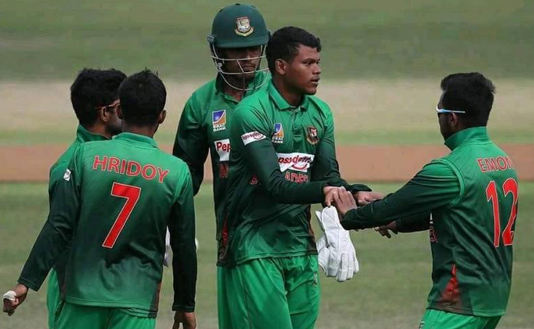 Spinner Rakibul Hasan slammed a stunning hat-trick as Bangladesh Under-19 team took a giant stride towards the knockout stages of the ICC Under-19 Cricket World Cup, crushing Scotland by seven wickets in Potchefstroom in South Africa on Tuesday.

Opener Tanzid Hasan though was dismissed for a first ball-duck, his fellow opener Parvez Hossain Emon helped Bangladesh off to a fluent start with 15 ball-25, hitting two fours and as many sixes.


Emon and Shamim Hasan thereafter fell in quick succession but it mattered little and Towhid Hridoy and Mahmudul Hasan Joy helped the side gun down the total effortlessly.

Joy was not out on 35, sending the ball across the rope for four times in 48-ball innings while Hridoy was unbeaten on 17.

Hasan’s scalps included Kess Sajjad, Lyle Robertson and Charlie Peet in successive balls. Later he took the wicket of Jamie Cairns to bring an end to the Scot’s innings.

He was ably supported by Shoriful Islam and Tanzim Hasan Shakib who both grabbed two wickets apiece and sliced the top order.

This win leaves the Asian nation top of Group C with four points, and a place in the Super League would be theirs as soon as Wednesday should Pakistan beat Zimbabwe in Potchefstroom.


Bangladesh captain Akbar Ali was pleased with his side’s clinical display so far in the tournament, having opened the tournament with a nine-wicket win over Zimbabwe on Saturday.

“It feels good to win back to back matches and gives us some confidence heading to our next game against Pakistan. We will try to beat them and look at getting to the next round having finished at the top of the group,” said Ali.

Hat-trick hero Hassan added: “I feel very great today with getting the first hat-trick of my career. My teammates were also excited.” Scorecard