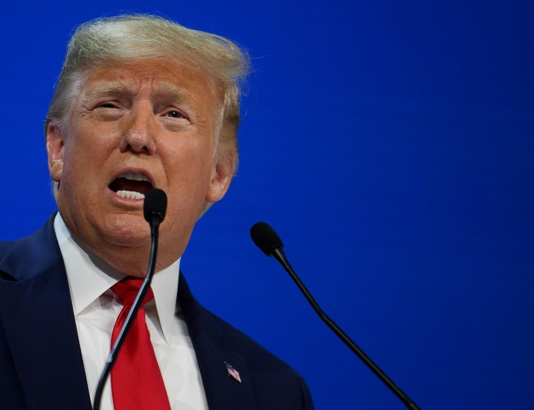 Sparks flew Tuesday over proposed rules for the Senate trial of President Donald Trump, as Democrats accused Republicans of attempting a “cover-up” of evidence that the US leader abused his powers. The first full day of the historic trial saw the Republican Senate leader Mitch McConnell submit a resolution on procedures that does not admit evidence from the investigation of the president.

It also significantly compresses the timeline of Bill Clinton’s 1999 trial, and prevents witnesses from being subpoenaed until both sides have finished arguing their case — in what Democrats alleged was a bid to prevent fair and open proceedings. “Leader McConnell’s process is deliberately designed to hide the truth from the Senate and from the American people, because he knows that the President’s wrongdoing is indefensible and demands removal,” House Speaker Nancy Pelosi said in a statement.


“The Senate GOP Leader has chosen a cover-up for the President, rather than honor his oath to the Constitution,” she said. Democratic prosecutor Adam Schiff, who led the investigation that resulted in Trump’s December 18 impeachment by the House of Representatives, accused McConnell of working “in concert” with the White House to prevent a fair trial.

“This is a process for a rigged trial,” he charged.

After the two articles of impeachment charging Trump with abuse of power and obstruction of Congress were submitted to the Senate last week, his trial gets underway in earnest Tuesday afternoon with the 100 senators — the jurors in the case — voting on a timeline and rules for evidence.

It is only the third time a president has endured an impeachment trial, after Clinton and Andrew Johnson in 1868.

Like his two predecessors, Trump looks almost certain to be acquitted by the Senate Republican majority in a trial that could be as short as two weeks.

McConnell unveiled procedures late Monday which called for each side to have 24 hours over two days to present their case.


That suggested that the arguments in front of presiding Supreme Court Chief Justice John Roberts could stretch for 12 hours at a time, starting from 1 pm (1800 GMT) and spilling into the early morning hours.

Only afterwards would the question of witnesses be addressed: Democrats say they need to hear from key officials whose testimony the White House has until now blocked, but many Republicans retort that they had their opportunity and must now be content with the record to date.

Democrats have vowed to fight the proposed rules, accusing McConnell of rushing the trial and making it harder for witnesses and documents to be presented.

But with a 53-47 Republican majority in the Senate, and little dissent within the party, the rules are likely to pass with ease.


Schiff, who is leading the House impeachment managers team prosecuting the case against Trump, nevertheless urged Republican senators to force McConnell to change his proposal.

“This is the process if you do not want the American people to see the evidence,” he said.

The trial opens four months after the Ukraine scandal exploded, and 10 months before Americans go to the polls to decide whether to re-elect Trump.

The president himself was in Davos, Switzerland for the World Economic Forum on Tuesday, where he repeated his longstanding characterization of impeachment as a “hoax.”

In Davos, Trump said, “we’re meeting with world leaders, the most important people in the world and we’re bringing back tremendous business.”

“The other’s just a hoax,” he said. “It’s the witch hunt that’s been going on for years and frankly it’s disgraceful.”

The articles of impeachment state that Trump tried to pressure Ukraine into interfering in the 2020 election to help him win, and that he then tried to thwart the investigation by blocking witnesses and denying documents to the House of Representatives.

Central to the scandal is a July 25 telephone call in which Trump pushed Ukrainian President Volodymyr Zelensky to announce an investigation of former vice president Joe Biden, Trump’s potential opponent in the November vote.

Trump is accused of withholding nearly $400 million in military aid for Ukraine’s war against Russian-backed separatists, and refusing Zelensky a White House meeting, unless he opened a probe of Biden.


On Sunday Trump’s legal team issued a 110-page defense which claimed the House has accused him of no specific “crime,” that their investigation was a “rigged process,” and that Trump was within his rights to push Ukraine to investigate Biden.

The Democrats’ hopes for conviction rest heavily on whether they can persuade four Republican senators to break ranks and agree to subpoenaing four witnesses, current and former high-level Trump aides who Democrats say have first-hand knowledge of Trump wrongdoing.
(AFP)