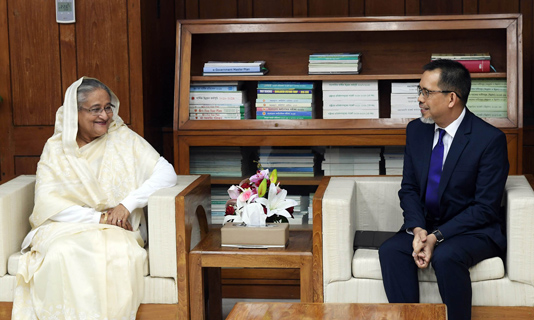 “You’ve made tremendous development in the agriculture sector So, we want your support for expanding our agriculture sector, especially the hatchery sector,” PM’s Press Secretary Ihsanul Karim quoted the High Commissioner as saying while briefing reporters after the meeting at the premier’s Sangsad Bhaban office this evening.

The press secretary said the Prime Minister and the High Commissioner discussed boosting the level of cooperation further between the two countries.

Sheikh Hasina said that Bangladesh can share its experience with Brunei about its success in food grains and vegetable production.


She invited entrepreneurs of Brunei to invest in food and agro processing industries in the 100 economic zones across the country.

The Prime Minister also said that Bangladesh is looking forward to receiving Sultan of Brunei in Bangladesh during the Mujib Year.

She recalled her recent visit to Brunei.

Sheikh Hasina welcomed the newly appointed High Commissioner and assured him of providing all out support to discharge his duties in Bangladesh.

The High Commissioner of Brunei Darussalam raised the issue of avoidance of double taxation before the Prime Minister.

He also mentioned that Brunei wants to expand its trade and commerce with Bangladesh and already had talked to the FBCCI and proposed to form Brunei-Bangladesh Business Forum.

He mentioned that there are about 25,000 Bangladeshis working in Brunei and a good number of them are doctors, engineers and teachers.

The High Commissioner said that his country is interested to import meat from Bangladesh.

Principal Secretary to the Prime Minister Dr. Ahmad Kaikaus was present during the meeting.
(BSS)