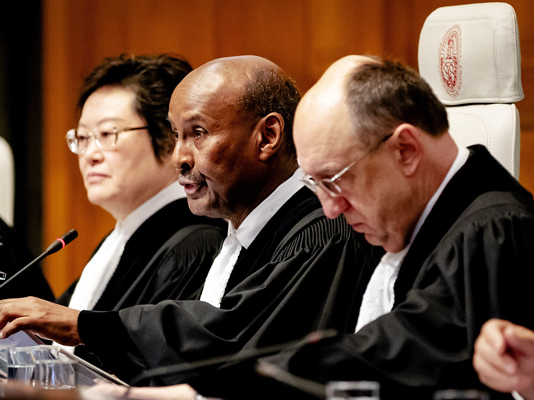 Welcoming the ICJ (International Court of Justice) verdict on Rohingya atrocities, Foreign Minister Dr AK Abdul Momen today termed it a victory for humanity and a milestone for human rights activists across all nations.

“We welcome the verdict …. I do believe Myanmar will honour the court … it won’t be possible for them (Myanmar) to ignore it,” he told BSS here over the phone from Ecuador after ICJ handed over the verdict in The Hague, Netherlands.
The UN’s top court today told Myanmar to take urgent steps to prevent the alleged genocide of Rohingyas as well as to report back within four months, and then every six months after that.

Momen said the verdict will benefit the Rohingya repatriation process in two ways: in one hand, from now on Myanmar has to be more sincere in creating conducive environment in Rakhine to take back their nationals, on the other Rohingyas will get confidence to return their home voluntarily.


“ICJ, the world court, asked Myanmar not to make any atrocity against Rohingyas … it will give confidence to them (Rohingyas) over voluntary repatriation,” he said.

“Russia and China have already agreed that Rohingyas must be repatriated … now this verdict will help them convince Myanmar (in this regard),” he said.

Earlier, in a quick reaction, made for media just after the verdict, Momen said it’s “a victory for Gambia, OIC, Rohingya and of course, for Bangladesh. God bless humanity and also the ‘mother of humanity’ Sheikh Hasina”.

He said “The court used the term ‘Rohingya’ and also rejected Myanmar’s claim, also asked Myanmar to stop genocide and atrocities against Rohingyas”.

The foreign minister hoped that such verdict hopefully will stop recurrence of ethnic cleansing and genocide in the world.


Momen also noted that the ICJ accepted all four provisional measure request in an unanimous verdict made by all 15 judges of ICJ.

The foreign minister is now in Ecuadorian capital of Quito to attend the Global Forum on Migration and Development.

Gambia had brought a case against Buddhist-majority Myanmar to the International Court of Justice (ICJ) with the backing of the Organisation for Islamic Cooperation, Canada and the Netherlands.

The West African nation Gambia alleged that Myanmar had breached the 1948 UN Genocide Convention at the December hearing in The Hague, that witnessed Aung San Suu Kyi defended her country personally against allegations of widespread rape, arson and mass killings.

Bangladesh currently extends makeshift refuge over 1.1 million forcefully displaced Rohingyas in Cox’s Bazar while most of them arrived since Myanmar launched a military crackdown on August 25, 2017, which the UN called a “textbook example of ethnic cleansing” and dubbed as “genocide” by other rights groups.

The physical arrangement stipulates that the return of Rohingyas will be completed preferably within two years from the commencement of repatriation.

However, on August 22, 2019, despite completion of all-out preparations to start the repatriation process of forcibly displaced Rohingya people, they did not want to return to their homes in Myanmar’s Rakhine State.
(BSS)