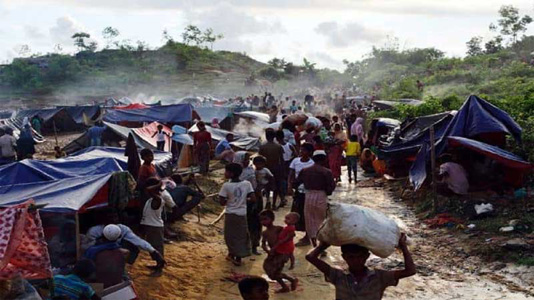 The UN’s top court told Myanmar on Thursday to take urgent steps to prevent the alleged genocide of the Buddhist nation’s minority Rohingya Muslims. The order was the first time that Myanmar has faced justice over a 2017 military crackdown that sent around 740,000 Rohingya fleeing into neighbouring Bangladesh.

The International Court of Justice in The Hague granted a series of emergency steps requested by the mainly Muslim African state of The Gambia under the 1948 Genocide Convention. Presiding judge Abdulqawi Ahmed Yusuf said Myanmar must “take all measures within its power to prevent the commission of all acts” described by the convention.

These included “killing members of the group” and “deliberately inflicting on the group conditions of life calculated to bring about its physical destruction in whole or in part.” He added that the “court was of the opinion that the Rohingya in Myanmar remain extremely vulnerable.”


The court ordered Myanmar to report back within four months, and then every six months after that. The Gambia asked for the measures pending a full case that could take years. The court — set up after World War II as the UN’s top judicial organ to rule in disputes between nations — had earlier ruled for the first time that it had jurisdiction in the case.

The ICJ’s orders are binding but it has no power to enforce them. However
the “significance… shouldn’t be written off,” said Cecily Rose, assistant
professor in international law at Leiden University in the Netherlands.

“The court’s orders and judgments tend to carry relatively great authority
or legitimacy. Even though the situation in Myanmar is highly political and
fragile, international law still plays a role by informing decision-making
among international actors,” she told AFP.

The ruling comes days after a Myanmar commission concluded that some
soldiers likely committed war crimes against the minority group but that the
military was not guilty of genocide.

They said Myanmar’s internal judiciary was incapable of assuring
accountability and simply enabled the perpetrators to “continue to carry out
such violent acts with impunity”.

The military dodged questions in the capital Naypyidaw on Thursday morning,
with a spokesman telling reporters it would simply “follow the instructions
of the government”.

The Gambia brought the case with the backing of the 57-nation Organisation
for Islamic Cooperation. Canada and the Netherlands have since also lent
their support.

Nobel peace laureate Suu Kyi did not attend Thursday’s ruling, where
Myanmar was represented by Minister of the Office of the State Counsellor
Kyaw Tint Swe.

In The Hague in December, Suu Kyi defended the military that once kept her
locked up, arguing that her country was capable of investigating any
allegations of abuse and warned that the case could reignite the crisis.


On Monday a Myanmar-appointed “Independent Commission of Enquiry” went the
furthest that any investigation by the country has gone so far in accepting
that atrocities occurred.

The panel said some security personnel had used disproportionate force and committed war crimes and serious human rights violations, including the “killing of innocent villagers and destruction of their homes”. But it said there was “insufficient evidence” of genocide.
(AFP)