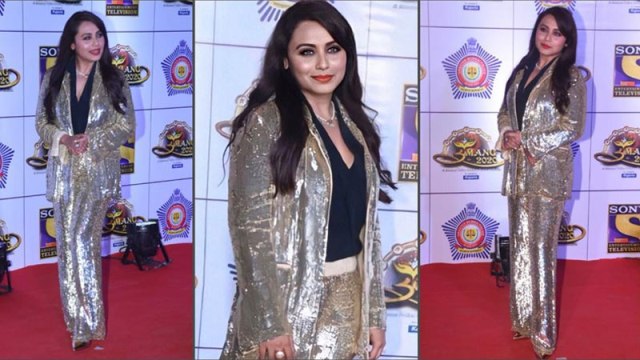 Online Desk : It was 1998 when everyone including Rahul (SRK) fell in love with the ease with which Tina (Rani Mukerji) sashayed into college and gave fashion heebie-jeebies the coolest gangs. Cut to 2020, we’re still wondering if certain questionable ‘90s fashion has got stuck in a loop.

Do you think Dormammu would consider bargaining on this one? As a girl growing up in the nineties in a country like ours, Bollywood fashion was most of what we wanted to follow and learn from, at least most of it.

Rani Mukerji, most recently seen in Mardaani 2 as a tough cop, has experimented with a variety of styles over the years. She is someone who definitely likes to keep things simple but at the same time, eases herself into high-fashion labels namely Gucci, Louis Vuitton, Dior and others. For her traditional wear, it’s mostly been her friend and celebrated fashion designer Sabyasachi Mukherjee, who styled her a decade and more ago too for films such as Baabul. The saree fashion donned by the actor in the film still remains a fond memory, especially the midnight blue saree she wore with a parrot green brocade blouse for a song sequence.


In 2020, when the style game is defined by who you’re wearing, how far your popularity is reaching in the virtual world, who you’ve been styled by, and turning your ‘passion’ of playing dress-up into a full-time profession, Rani Mukerji chooses to be different. She is famous for being totally hands-on with her fashion choices and even the makeup she wears. Even though her hair is nearly the same in all her looks, we don’t mind that, because great hair, no judgment. While the change has happened over a period of time, it’s only the last decade (2010-2019) when this pattern has changed, giving rise to influence in more ways than the good ol’ Bollywood films, or the new-age TV shows.

Last night, popular Instagram fashion police DietSabya, called out Rani Mukerji’s stylist through three stories they put up. It was about the look Rani Mukerji sported on the red carpet for Umang 2020, held in Mumbai on Sunday night. We tried reaching out to the DietSabya team for a comment on this development too but we’re yet to hear back from them.


Speaking about Rani’s look, the head-to-toe glitter (gold) was a tad disturbing to our senses. It’s not because pantsuits are a wrong choice, but Rani Mukerji could work with a simpler silhouette and definitely a different texture. Imagine a dull-toned glitter ensemble blended in a gossamer texture that would add charm to the actor’s overall look, just the way we’ve liked it in the last few years. This pantsuit is from UK-brand P.A.R.O.S.H, a favourite with Meghan Markle as well. This look has also been seen in a baby pink aside from the gold we saw on Rani Mukerji.

What was on point: Rani Mukerji’s natural choice for a foundation with smokey eyes and a rust-red lipstick.

What went wrong: There is a thing called ‘extraaa’ but one needs to measure it regardless. The pantsuit seemed like the perfect thing to wear when you wanted to go unburdened with jewellery. To match the look were pointed heels in, no guesses, gold.

How to fix it, probably: We miss seeing the bong beauty in sarees and traditional patterns, and choosing to go minimal. Simpler textures and silhouettes could also be given a try.


In an interview with Rajeev Masand in early 2018, the actor was quoted saying, “Change is inevitable in everybody’s life, change is the only constant that you’re dealing with. You can’t just get stuck in time…” As avid fans of the actor’s craft, it’s also her fashion we would like to see change. The question that arises, however, is if social media has also led to everyone wanting to look like one another? We are sure Rani Mukerji will be different when we do see her on social media because as a pioneer in Sabyasachi sarees on the big screen, there’s a high chance of leading by example than following a lead.