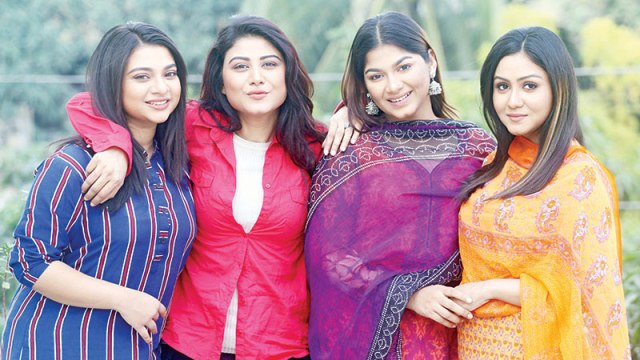 Online Desk : Parsa Evana, Kajol Suborno, Nishat Priyom and Samanta—four young actresses from the country’s showbiz are set to share the screen in upcoming drama serial. They will appear as siblings in ‘Khan Bari Barabari’ directed by Shakal Ahmed. Written by Yusuf Ali Khokon, the comedy drama serial will be aired on Boishakhi TV soon.

DhakaLive has news that the shooting of ‘Khan Bari Barabari’ is currently taking place in various locations of Uttara in the capital. The story of the drama revolves around the five siblings which also include actress Mim Chowdhury along with the four young faces. Mahmudul Islam Mithu will play the role of their father.


Regarding the drama, actress Evana said, “Shakal Bhai (Shakal Ahmed) is a talented director. After a long time, I am performing under his direction. As the story of the drama revolves around us (five sisters), I am enjoying myself a lot.”

“In the drama serial, I am playing a character similar to a tomboy. I am trying to bring out the character through my performance as lively as possible”, said Kajol Suborno about her role.

Nishat said, “This is my first project under Shakal Bhai. I found him working with immense care and giving extra effort to make everything flawlessly. My character in the drama is really unique.”


Samanta said about the drama, “Spending time with the unit both on and off screen has always been a pleasure. Before each scene, Shakal Bhai briefs us the summary, what makes it easier for us to perform. I am optimistic about the drama.”