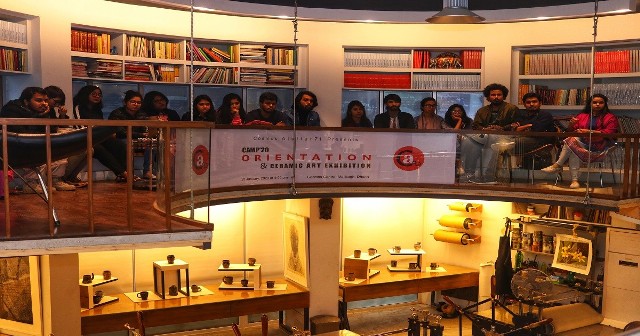 Desk Reports ; The second annual membership programme of Cosmos Atelier71, a printmaking studio with an overarching vision to serve art in Bangladesh, was launched Saturday through an orientation welcoming 71 new members for the 2020 calendar year.

The Cosmos Atelier71 Membership Programme 2020 (CAMP ’20) orientation took place on the studio premises located at Cosmos Centre in Malibagh of the capital.

Focusing on the number ‘71’ in remembrance of the Liberation War of Bangladesh in 1971 and echoing with the name of the studio ‘Cosmos Atelier71’- the second ever membership programme of the studio welcomed a total of 71 members for the next one calendar year.Alongside the orientation, Cosmos Atelier71 also showcased hundreds of ceramic art mugs from the ceramic art project titled ‘50 Artists 100 Mugs‘, one of the most successful ventures of its inaugural annual membership programme in 2019, for the art-enthusiasts in attendance.


Sourav Chowdhury, Executive Artistic Manager of Cosmos Atelier71, told UNB that they have selected these 71 artistes from over 120 applications from across the country.

“Our Cosmos Atelier71 is a wonderful and friendly place to practice art. These 71 members will attend different workshops and events at the gallery, as well as in different venues. They will also use this platform to exhibit their art works,” Sourav, who conducted the orientation program, added.“Extending our previous activities, we are planning to initiate more activities such as art talks with eminent artists, outdoor art camps and a lot of other exciting campaigns for our members,” he further said.

Sourav introduced and described some of the notable previous activities of Cosmos Atelier71 to the attendees.

Adbur Rahman Nur, Art Executive of Cosmos Atelier71, then explained the path ahead as part of the annual programme for the benefit of the new members.

Tarpon Paul, a freelance visual artist who is part of the new intake, said it’s a great opportunity to be attached with Cosmos Atelier71.


“It’ll introduce me with prominent artists and their works,” said Paul, adding he was grateful to the studio for selecting him.Md Humayun Kabir Tutul, a final year student of Theatre and Performance Studies at Kabi Nazrul University in Trishal, Mymenshingh, also attended the orientation as a new member.

Kabir expressed his joy to UNB about getting involved with the Atelier as he believes it will help him in developing his skills in set design and other activities in theatre.


Cosmos Atelier71 launched its first ever membership programme last year with 55 members and conducted notable workshops and art-oriented programmes in association with the members.