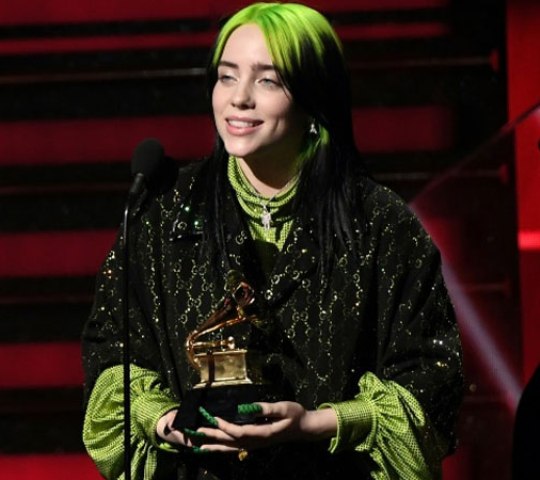 Eilish soared to mainstream stardom over the past year, after having won a fervent online following for her in-your-face pop sound that can get a little creepy at times, with haunting melodies and heavy bass.

“Mainly I think the fans deserve everything. I feel like they have not been talked about enough tonight because they’re the only reason any of us are here at all,” she said.

She shared her success with her older brother Finneas O’Connell, her primary creative collaborator.

“We just make music in a bedroom together,” said O’Connell. “We still do that and they let us do that. (…) This is to all of the kids making music in your bedrooms today — you’re going to get one of these.”

Eilish also offered a shoutout to pop sensation Ariana Grande, saying she in fact deserved Album of the Year for “thank u, next.”

The teen star was among the leading Grammy nominees at Sunday’s gala — just 17 when the shortlists came out, she is the youngest person ever nominated in all of the top four categories.

She scored a total of five awards on six nominations, including both Record and Song of the Year for “Bad Guy” — which made her the first musician born in the 2000s to top the Billboard Hot 100.

In claiming the spot, she finally booted Lil Nas X, the country-trap sensation whose viral hit “Old Town Road” set a record of 19 weeks atop the US songs list.


Eilish has been an outspoken advocate for action to tackle climate change, banning plastic straws at her shows and encouraging fans to bring their own refillable water bottles.

The artist named Billboard’s 2019 Woman of the Year has also written and will perform the theme song for the upcoming James Bond film “No Time To Die.”

“I feel like I’m not supposed to be here,” she told E! television on the red carpet before the gala. “Life is weird.”