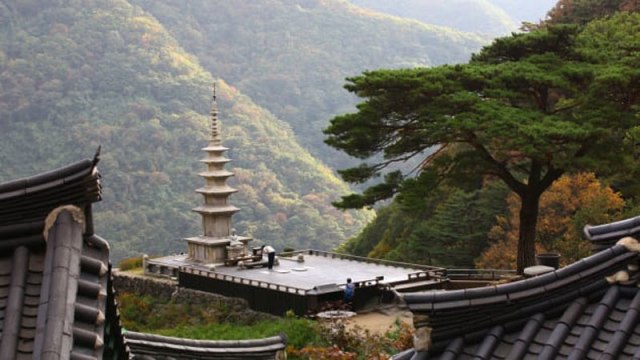 Desk Reports : There are some 900 traditional Buddhist temples in South Korea — and around 20,000 in total. A visit to any of these local places of worship — many of them centuries old — can be a humbling, calming or uplifting experience.

Many of them can be found nestled in the mountains throughout the country, usually in locations believed to have the best pung-su (feng shui) of the area.
But despite the endlessly beautiful and numerous temples, even the most serious pilgrim need not visit all 900. The 33 temples below — 33 to match Buddha’s 33 steps to enlightenment — are simply breathtaking.

Manggyeongsa Temple is situated on Taebaek Mountain, at an altitude of 1,460 meters.
Legend has it that a stone statue of the Bodhisattva of wisdom appeared at the Manggyeongsa Temple site. When Jajang, a monk from the Silla Dynasty (57 BC-935 AD), heard of it, he built the temple to enshrine the statue.
The “Dragon Spring” near the entrance of the temple is known as the highest spring in Korea.

Taeansa Temple is especially beautiful in fall when the thick forest surrounding the temple turns red and yellow.
The 2.3 kilometers of driveway leading up to the temple, as well as the 1.8-kilometer-long valley where it is situated, make for beautiful drives in every season.
Nearby attractions include Neungpa Tower, an exquisite traditional site near the Dongli Mountain valley, Gok-song Haneulnari Village (a farming-themed village) five kilometers away and a sledding hill.

Although Naejangsa is said to have been first erected in the year 636, most of its current buildings were built after the Jeongyujeran (the Japanese invasion of 1597) and the Korean War.
The scenic beauty of its surroundings — particularly the Naejang National Park — is especially notable for its fall foliage.

Daejeonsa is the largest temple in Cheongsong-gun and its magnificent view of Juwang Mountain is one of the best views in the country.
Daejeonsa’s most famous building, Bogwangjeon, is South Korea’s treasure no. 1570, while the woodblock of a handwritten letter from Lee Yeo-song, a general of the Ming Dynasty, to Samyeong Daisa is kept within the temple.


According to the legend surrounding this temple, a man loved a princess so much that he became a snake and wouldn’t leave her alone. When she begged leave to get some rice from the temple, the snake let her go but then went looking for her, only to be struck by lightning and die. The princess then buried him at the temple.
Visitors to the Cheongpyeongsa Temple can also take a boat ride on Soyang Lake and a walk along a beautiful valley and a waterfall, thus enjoying a perfect weekend getaway.

With more than 60 buildings and 70 hermitages, Beopjusa was a large, glorious temple before it caught fire in the Japanese invasion of South Korea in 1592.
Currently the temple houses 30 buildings and many cultural properties, including the highest pagoda existing in South Korea (a five-story wooden pagoda 22.7 meters high) — which is also a national treasure.

316 marked a big year for Gangcheonsa, when a five-story stone pagoda was added to the temple. It is said that 1,000 monks stayed here at one point.
In addition to the cultural assets at the temple, various attractions are nearby, such as the Geumseong Mountain fortress, Yongso waterfall, Lake Gangcheon, Lake Damyang and Naejang National Park.

Buseoksa counts five national treasures among its cultural assets and is one of the 10 largest temples in South Korea.
Buseoksa’s Muryangsujeon (South Korea’s national treasure number 18) is one of Korea’s oldest wooden buildings.
“If you like flowers, spring is the best season, if you like thick green trees — summer, fall foliage — autumn, and sunsets are particularly beautiful in winter,” says the temple’s manager, who adds that it is very popular with a lot of Japanese and Chinese visitors.

One of the three largest temples in Jiri mountain, Cheoneunsa Temple has had its fair share of drama; it was first built in 828, burned down during the Japanese Invasion of Korea in 1592, rebuilt in 1610, burned down again in 1676, rebuilt the next year, caught fire once again in 1773, and finally rebuilt in 1775.

Legend has it that when people were rebuilding the temple after 1592, they killed a big snake that kept appearing at a nearby spring. When the spring dried up and the temple kept catching fire, the villagers believed that the snake must have been the guardian of the spirit of the water.
When Wongyo Lee Gwang-sa, one of the four most famous master calligraphers of the Joseon Dynasty (1392-1910), heard the story, he wrote “Cheoneunsa” in a flowy style and hung it up at the temple — and there hasn’t been a fire at Cheoneunsa since.

A cave temple built on a limestone cliff in Hamwol Mountain, Golgulsa Temple gained fame as a place where Sunmudo, a Zen martial art and a training method that has been secretly handed down through generations, is practiced.
There are 12 large limestone caves in this temple and a rock cliff Buddha is carved in relief on the highest part of the rock face.
Anyone who wants to participate in the Sunmudo training can check out the Golgulsa Temple stay program — but remember, you will have to get up at 4 a.m.

The stone stairs at this temple received its share of celebrity when actress Lee Da-hae filmed a now-famous scene on it in the period drama “Chuno.”
Lodged in between large rocks, the small temple features a beautiful and steep stone staircase adorned with tiles.
The breathtaking view of Seonjingang River and Jiri Mountain is definitely worth the climb.

Although an unfortunate fire burned down a number of the temple’s buildings in 2009, Hyangilam’s view of the southern coast and Geumo mountain makes it one of the best places to visit in South Korea.
The mountain path to the temple is a little steep, but visitors come to see the 500-year-old camellia tree at the entrance of the village and the sight of the sun rising from the southern sea.
Hyangilam Sunrise Festival is held at here at the end of each year.

Magoksa was a large temple with 30 rooms when it was first built in the year 640, but after numerous remodeling and reconstructions, not that many buildings remain.
However, the ones that do are important ones, and house a dozen treasures and cultural assets.

Cheongryangsa Temple stands in front of a rock face between countless mountaintops and bizarre rocks.
Many legendary scholars such as Toegye Yi Hwang and Wonhyo Daisa have studied at this temple. A visit should also include an outing to the eight caves named after the outstanding individuals who have studied here.

Botapsa has a short history compared to the numerous thousand-year-old temples on this list, but it has a three-story wooden pagoda — the only one in South Korea that is actually mountable — and a beautiful scene adorned with over 200 different kinds of wild flowers.
Botapsa currently offers three different temple stay programs.

Hwaeomsa is an ancient temple that took centuries to complete; the first two of its buildings were erected in 544 and extensions were added in the years 643 and 875. The temple burned down during the Japanese Invasion of South Korea in 1592 and the final reconstruction was finished in 1636.
Numerous cultural assets are kept here, including four national treasures — one of which is the biggest wooden building in Korea — five treasures, and one natural monument.
Cherry blossoms are planted alongside Route 19 — from Hadong to the temple — offering drivers a fantastic view every spring.

Beomeosa Temple, erected in 678 by Uisang Daisa, is one of the three largest temples in the Gyeongsang province.
It was one of the largest temples in the Silla Dynasty when it was first established, but everything was lost to fire during the Japanese Invasion of Korea in 1592, although it was reconstructed in 1613.
In addition to the treasures and cultural assets present at the temple, there are various attractions such as the field of rattan vines — which is classed a national monument — and 11 different hermitages within the mountain.

Named Bulyoungsa, meaning Buddha’s shadow temple, as the pond of the temple is said to have once showed a shadow of Buddha, this temple stands amidst the Bulyoungsa Valley and has extraordinary view of a luxuriant forest and crystal-clear water.