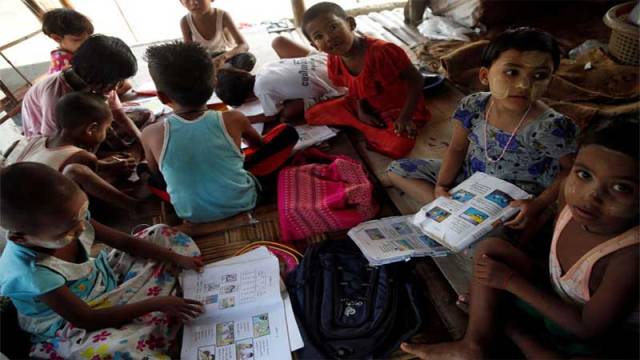 Online Desk : Rohingya children living in Bangladesh refugee camps will be allowed to receive a formal education after a change of heart by Dhaka in a move welcomed by right activists.

Nearly one million Rohingya, including more than half a million children, live in the squalid and crowded camps near the southeastern border with Myanmar, where many had fled from in 2017 after a brutal military crackdown.

The children were previously barred from studying the curriculums used in Bangladesh and Myanmar, and instead received primary education in temporary learning centres set up by the UN children”s agency UNICEF.


“We don”t want a lost generation of Rohingya. We want them to have education. They will follow Myanmar curricula,” Foreign Minister A.K. Abdul Momen told AFP on Tuesday.

The decision came after a meeting of a national taskforce set up by the government.

Local media reported that a pilot programme involving more than 10,000 students would be launched soon, with UNICEF and Dhaka jointly designing the curriculum. The refugee children will be schooled in Myanmar history and culture up to age 14, and will also receive skills training so they can take up jobs back in Myanmar when they return home, the foreign ministry said.

“I can”t express my joy with words … generations of Rohingya hardly had any education in their homeland in Myanmar as they were discriminated there and were robbed of their citizenship,” Rohingya youth leader and human rights activist Rafique bin Habib said.


“The decision will minimise the chances for a Rohingya kid to get radicalised (in the camps),” he added.

UN representative in Bangladesh Mia Seppo told AFP the move would “make it easier for them to go back home to Myanmar when the time is right for returns”. Some Rohingya children have used fake Bangladeshi identity cards and hidden their ethnic identities to enrol in local schools.

Authorities last year expelled scores of them from schools in a drive condemned by rights groups.


Tens of thousands of other Rohingya Muslim children were also educated in madrassas set up by Islamic groups in the camps.

The decision came almost a week after UN”s highest court ordered Myanmar to do everything in its power to prevent the genocide of Rohingya Muslims.