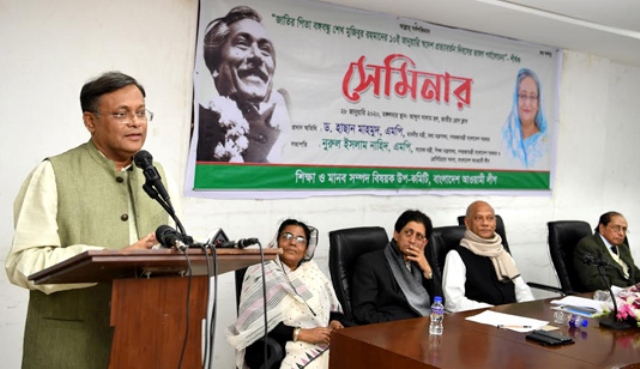 Desk Reports : Information Minister Dr Hasan Mahmud today called for building a meritorious, humane and patriotic nation that will be a model for others.

“We want to build a nation having human values, affection and patriotism without following other nations blindly. . . Father of the Nation Bangabandhu Sheikh Mujibur Rahman has taught us how to live honorably,” he told a seminar at an auditorium of Jatiya Press Club here.

Awami League Sub Committee on Education and Human Resources organized the seminar on the evaluation of Father of the Nation Bangabandhu Sheikh Mujibur Rahman’s speech on his homecoming day on January 10 in 1972.

Hasan said, “Our goal is to turn the country into a developed one by 2041. Through the material development, a country can be developed but I think we should make a good and enlightened nation too.”

The minister said Bangladesh is moving ahead indomitably to fulfill the dream of Father of the Nation Bangabandhu Sheikh Mujibur Rahman under the dynamic leadership of his worthy daughter Prime Minister Sheikh Hasina.

Bangladesh has already graduated to a middle-income country from the least developing one, said Hasan, adding that the country has gained remarkable progress in many socioeconomic indexes, including human development index, and achieved GDP growth higher than other countries in the last 11 years.

He said the GDP growth was 8.15 percent in the last year while the inflation in the country was less than 6 percent.

The minister said Bangladesh has surpassed Pakistan in all indexes and even surpassed India in many social indicators.

“After the independence, the Pakistanis expressed suspicion that Bangladesh would not survive for long but now Bangladesh has surpassed Pakistan in all indicators including per capita income, average life expectancy and foreign exchange reserve. It has been possible only for the outstanding leadership of Prime Minister Sheikh Hasina,” he added.

“Once Bangladesh faced food deficit… Despite shrinking of farm land due to rapid urbanization and construction of different infrastructures including houses, Bangladesh has now become a food surplus country as the present government has implemented multifaceted development programmes,” said Hasan, also the AL joint general secretary.


He said Bangladesh has made remarkable progress in strengthening the rural economy, setting example for other countries.

The minister said Bangladesh could progress more if negative politics was not pursued by political parties, especially BNP. “BNP criticises everything done by the government, but it should acknowledge the government’s good works and development activities,” he added.

Paying rich tributes to Bangabandhu, Hasan said he (Bangabandhu) was a leader of the masses. And for this, he is an exception to other leaders, he added.
(BSS)